When you need something done and you ask women to do it, it gets done~First Lady Michelle Obama 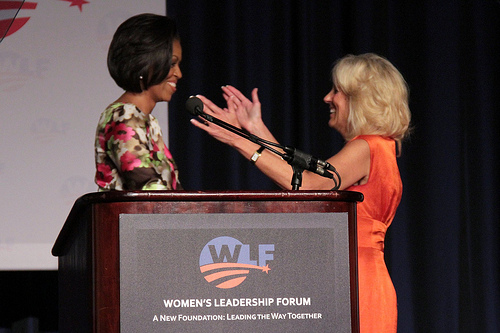 DNC~The first half of today’s Women’s Leadership Forum event was capped by appearances by First Lady Michelle Obama and Dr. Jill Biden, who have worked closely together on issues from military families to their recent visit to Haiti.

Dr. Biden spoke about her work teaching at a community college, and some of the extraordinary women she’s met who are working to improve their lives and the lives of those around them:

“I am profoundly moved by the women I meet, whether in my travels or in my classroom each day, by their determination to learn, and their quest to make a better life for themselves and their families.”

First Lady Michelle Obama then took to the stage, reminding the audience of when she’d last been with the group, at the Women’s Leadership Forum held in Chicago in 2008. The First Lady Lady spoke on what’s changed since and what remains the same now:

It’s easy to lose sight of that fact with all the back and forth that goes on here in Washington — folks yelling at each other on TV so that little things get blown out of proportion and sometimes big, important things don’t always get the attention that they deserve.

But when Barack and I travel the country now and we spend time with ordinary folks, they don’t have much interest in the scorekeeping that goes on here in Washington. They really don’t…

The questions they ask have nothing to do with the daily chatter that goes on here, and it has everything to do with the struggles, the real struggles they’re facing in their lives. They tell us about insurance companies that refuse to pay for the treatment that they need, and they ask us, “What do I do now?” Or they tell us, “I’ve been out of a job for months.” And they ask, “What are you going to do to help folks like me?”

The First Lady has made working with young people around the globe a priority, recently taking her first solo international trip to Haiti and Mexico. She told the story of a young woman she had met in Mexico City, and the stories like hers that show how women are the ones leading the fight to improve the world for future generations:

“I’ll never forget about a young woman that I met there named Maricela, who I met at a roundtable discussion with young leaders in Mexico City…Her father had passed away, and her mother — she told a story of how she worked tirelessly to support her and her four siblings; said her mom was always the first one to wake up in the morning, and the last one to go to bed at night. But she told us about the fact that despite their hardships, her mother was determined to build a better life for her daughter.

…This is a story that is told every day all around the world, and right here in America — a story about the strength and determination of women. Women who haven’t had much in their own lives, but who know exactly what they want for their children. Women who work those extra shifts, and make those sacrifices, so their daughters –- and their sons –- can have opportunities they never imagined for themselves.

I’m talking about women like Lilly Ledbetter, who kept on fighting for equal pay even when she knew that it was too late for herself, because she wanted something more for the women who came after her…I’m talking about women like Dr. Dorothy Height, one of my heroes — who kept up the fight for civil and economic rights up through the final months of her life. She once said, “I want to be remembered as someone who used herself and anything she could touch to work for justice and freedom…I want to be remembered as someone who tried.”

And every day, across this country, so many women wake up every day and try -– using everything they have –- to make life a little better for others…and that’s what you all are doing—building a better world for our kids and grand kids. We need you to stay involved. When you need something done and you ask women to do it, it gets done.”

Remarks by The First Lady and Dr. Biden to the Women’s Leadership Forum Issues Conference 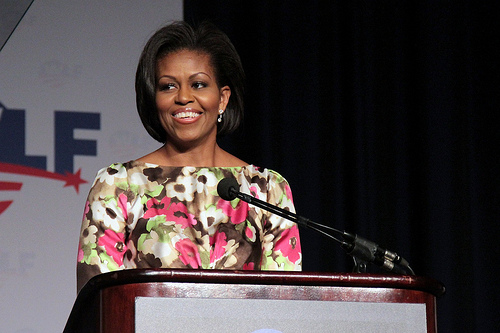