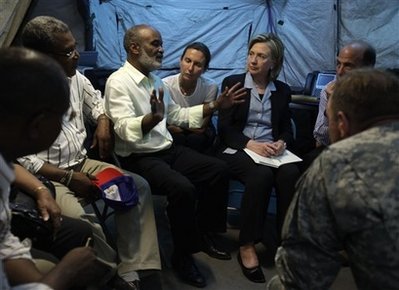 Clinton’s remarks appeared designed to counter any notion of a too-intrusive American involvement in the aftermath of the quake, while also assuring Haitians the humanitarian mission would continue as long as it’s needed.

“We are here at the invitation of your government to help you,” she said at a news conference at the Port-au-Prince airport. “As President Obama has said, we will be here today, tomorrow and for the time ahead. And speaking personally, I know of the great resilience and strength of the Haitian people. You have been severely tested. But I believe that Haiti can come back even stronger and better in the future.”

Clinton, the highest-ranking Obama administration official to visit since the magnitude-7.0 quake struck Tuesday, arrived in a Coast Guard C-130 transport that carried bottled water, packaged food, soap and other supplies. She was accompanied by Rajiv Shah, the U.S. Agency for International Development administrator who is acting as the top U.S. relief coordinator.

Clinton also met with U.N. officials and U.S. civilians and military personnel working on the relief effort. She said she and Preval discussed his government’s priorities: restoring communications, electricity and transportation.

“And we agreed that we will be coordinating closely together to achieve these goals,” she said, adding that she and Preval would issue a communique on Sunday outlining cooperation between the two countries.

Preval said he was encouraged to see former presidents Bill Clinton and George W. Bush together with President Barack Obama at the White House earlier Saturday in a joint plea for international assistance to Haiti.

He noted that U.S. aid has already arrived, and he told reporters he met a survivor who was pulled from the rubble Saturday and receiving care from American medical teams. He thanked Clinton for her visit and for Obama’s continued support of Haiti.

During the news conference, officials noted the clatter of military helicopters landing and taking off nearby.

“That’s a good sound,” Clinton said. “That means that good things are going to the people of Haiti.”

more about "Clinton Speaks in Haiti", posted with vodpod</div

“We had a very good meeting about all of the priorities of the Haitian government and the Haitian people,” Clinton said after a brief news conference following the meetings.

She said air efforts are focused on providing water, food and medical help. She also stressed the importance of restoring the country’s communications networks, electricity and transportation.

“We agreed that we will be coordinating closely together to achieve these goals.”

In an interview with CNN’s Chief Medical Correspondent Sanjay Gupta, Clinton said “every day we are making progress and I expect that to continue.”

In addition to the immediate needs, Clinton said the focus will switch next week to long-term recovery and reconstruction, telling Gupta she believed that Haiti, with the help of the international community, could be a better place than it was before Tuesday’s quake.

The U.S. Coast Guard plane she arrived on was carrying 100 cases of water, 100 cases of meals-ready-to-eat, and food and toiletries for about 140 U.S. Embassy staff members. Fifty Americans, who have been waiting to be evacuated, will fly back to the United States when Clinton departs.

more about "hillary clinton Haitians can’t ‘get a…", posted with vodpod