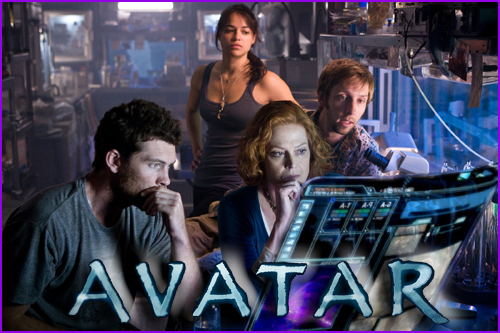 AVATAR takes us to a spectacular world beyond imagination, where a newcomer from Earth embarks on an epic adventure, ultimately fighting to save the alien world he has learned to call home. James Cameron, the Oscar®-winning director of “Titanic,” first conceived of the film 15 years ago, when the means to realize his vision did not yet exist. Now, after four years of production, AVATAR, a live action film with a new generation of special effects, delivers a fully immersive cinematic experience of a new kind, where the revolutionary technology invented to make the film disappears into the emotion of the characters and the sweep of the story.

We enter the alien world through the eyes of Jake Sully, a former Marine confined to a wheelchair. But despite his broken body, Jake is still a warrior at heart. He is recruited to travel light years to the human outpost on Pandora, where a corporate consortium is mining a rare mineral that is the key to solving Earth’s energy crisis. Because Pandora’s atmosphere is toxic, they have created the Avatar Program, in which human “drivers” have their consciousness linked to an avatar, a remotely controlled biological body that can survive in the lethal air. These avatars are genetically engineered hybrids of human DNA mixed with DNA from the natives of Pandora… the Na’vi.

Reborn in his avatar form, Jake can walk again. He is given a mission to infiltrate the Na’vi, who have become a major obstacle to mining the precious ore. But a beautiful Na’vi female, Neytiri, saves Jake’s life, and this changes everything. Jake is taken in by her clan, and learns to become one of them, which involves many tests and adventures. As Jake’s relationship with his reluctant teacher Neytiri deepens, he learns to respect the Na’vi way and finally takes his place among them. Soon he will face the ultimate test as he leads them in an epic battle that will decide the fate of an entire world.

IMDB member from England
It was Terminator in the 1980’s and then Titanic in the ’90s and it’s definitely Avatar in the 2000s!!

James Cameron is my most favourite director and he has once again broken all boundaries and created a visual extravaganza.

Avatar is Cameron’s latest magnum opus is probably one of the most anticipated movies since Titanic and now it seems that the visionary director has indeed created a film that’ll revolutionize the world of cinema.

The film was absolutely fascinating, interesting, entertaining and emotional. I loved the look on the Pandora jungle and it must be the best scenery in film history and the navis are definitely the best digital characters since Gollum from The Lord of the Rings. The special effects are so amazing that Pandora looks like a real location and you can mistake the navis as real characters. Avatar was almost 3 hours but it didn’t seem that long.

Avatar already makes it on my top 5 favourite movies and I intend to see it again and I am already waiting for it to release on Blu Ray because I’m sure that it will be one of the best Blu Ray titles.

The year is never stated, but the video log shows that the year is 2154.

Sigourney Weaver plays a James Cameron persona for her character in this film. Sigourney stated in an interview, “I teased him because to me I’m playing Jim Cameron in the movie as this kind of brilliant, approach-driven, idealistic perfectionist. But that same somebody has a great heart underneath. So I have to say I was always kind of channeling him.”

The Na’vi language was created entirely from scratch by linguist Paul R. Frommer. James Cameron hired him to construct a language that the actors could pronounce easily, but did not resemble any single human language. Frommer created about 1000 words.