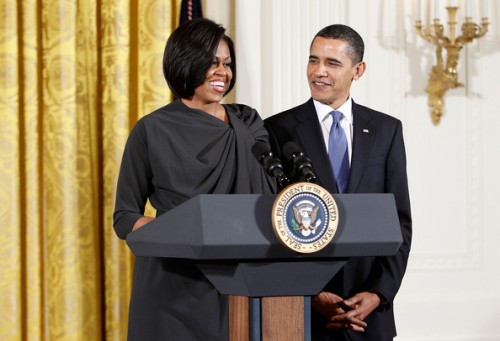 President Barack Obama (R) looks at his wife, First Lady Michelle Obama (L), as she speaks during a reception in honor of International Womens Day at the East Room of the White House March 8, 2010 in Washington, DC. The reception honored women from around the world and their achievements. (Photo by Alex Wong/Getty Images North America)

President Obama and First Lady Michelle hosted a International Women’s Day reception in the East Room to honor women from around the world and their achievements.

The event was emceed by actress Kerry Washington and will include singer Katherine McPhee, former Secretary of State Madeleine Albright and Afghan singer Mozdah Jamalzadah. Read the transcript.

This year marked the 15th anniversary of the adoption of the Beijing Declaration and Platform for Action, the outcome of the Fourth World Conference on Women in Beijing in 1995.

International Women’s Day is celebrated in many countries around the world. It is a day when women are recognized for their achievements without regard to divisions, whether national, ethnic, linguistic, cultural, economic or political. It is an occasion for looking back on past struggles and accomplishments, and more importantly, for looking ahead to the untapped potential and opportunities that await future generations of women.

more about "Secretary of State Hillary Clinton’s …", posted with vodpod