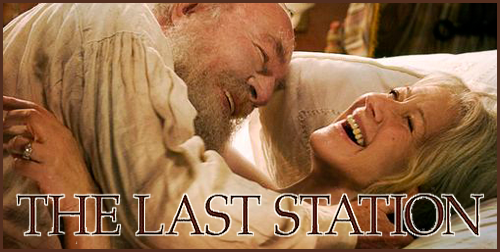 The Countess Sofya, wife and muse to Leo Tolstoy, uses every trick of seduction on her husband’s loyal disciple, whom she believes was the person responsible for Tolstoy signing a new will that leaves his work and property to the Russian people.

The film explores the final year of the Russian writer’s life with Christopher Plummer in the lead role and Helen Mirren portraying his wife, Sofya. Paul Giamatti, James McAvoy, and Anne-Marie Duff co-star in the Warner Bros. production, directed by Michael Hoffman from the novel by Jay Parini.

IMDB member from Auckland
“If you are familiar with the name,Count Leo (Lev)Tolstoy,but have never read ‘War & Peace’,or any of his other novels,fret not. It’s not necessary to enjoy ‘The Last Station’. A young man,Valentin Bulgakov (played by James McAvoy)is hired by Vladimir Chertkov (played by Paul Giametti,adding a touch of class to his already impressive backlog of film work),who oversees the written work of Count Tolstoy,to spy on him at his commune/ashram in the Russian country side,in the guise of Tolstoy’s personal secretary. Bulgakov arrives to find a homestead overseen by the Tolstoy’s,Leo (played to perfection by veteran,Christopher Plummer,who has come a long way since ‘The Sound Of Music’),and his wife,Sofya (Helen Mirren-always welcome on screen). During his stay at the Tolstoy residence,Valentin finds out that things are not what he perceives (Tolstoy doesn’t exactly practice what he preaches in real life). He manages to take a tumble to Tolstoy’s youngest daughter,Sasha (played by Anne Marie Duff). All of the dirty laundry & family drama comes out to make this a tart,funny,entertaining film with winning performances by all. Michael Hoffman writes & directs the screenplay,from the novel by Jay Parini,in a film that will hopefully garnish attention beyond the art house screen.”

Helen Mirren and Anne-Marie Duff, who play mother and daughter in the film, have both portrayed Queen Elizabeth I (Mirren in “Elizabeth I” (2005) and Duff in “The Virgin Queen” (2005)).

Helen Mirren and Christopher Plummer replaced Meryl Streep and Anthony Hopkins, who were originally scheduled to play the roles of Sofya and Leo Tolstoy.