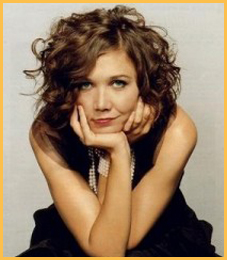 Maggie Gyllenhaal is one of the great young actresses of today. After receiving rave reviews out of the 2002 Sundance competition for her starring role opposite James Spader in Lion’s Gate’s SECRETARY, she went on to receive a Golden Globe® nomination for “Best Actress in a Comedy or Musical,” an Independent Spirit Award nomination for “Best Actress,” a Chicago Film Critics’ Award for “Most Promising Performer,” a Boston Film Critics’ Award for “Best Actress,” a National Board of Review Award for “Breakthrough Performance” and an IFP/ Gotham “Breakthrough Performance” Award.

Years later, back at Sundance in 2007, Maggie starred in SHERRYBABY which opened in theaters September of last year. The film was well-received by critics and garnered her second Golden Globe nomination, this time for Best Actress in a Motion Picture-Drama. Gyllenhaal was also nominated for a 2006 Independent Spirit Award for her role in Don Roos’ HAPPY ENDINGS, opposite Lisa Kudrow and Tom Arnold.

Maggie was recently seen in the Warner Bros. box office hit DARK KNIGHT, directed by Chris Nolan and in Sam Mendes’ AWAY WE GO. Next up will be THE BIG BANG with Emma Thompson.

In August 2006, Maggie was seen in TRUST THE MAN with Julianne Moore, Billy Crudup and David Duchovny and in Oliver Stone’s WORLD TRADE CENTER with Maria Bello and Nicholas Cage. She also starred in Marc Forster’s STRANGER THAN FICTION with Will Ferrell, Dustin Hoffman, Queen Latifah and Emma Thompson. In the past few years, she appeared in John Sayles’ CASA DE LOS BABYS with Daryl Hannah and Lily Taylor and Mike Newell’s MONA LISA SMILE in which Maggie co-starred with Julia Roberts, Julia Stiles and Kirsten Dunst. She was also seen in CRIMINAL with Diego Luna and John C. Reilly as well as Spike Jonze’s ADAPTATION.

Also accomplished on stage, Gyllenhaal starred as Alice in Patrick Mauber’s award-winning Closer at the Mark Taper Forum in Los Angeles for director Robert Egan, and previously at the Berkeley Repertory Theatre. She has also appeared in Anthony and Cleopatra at the Vanborough Theatre in London. In 2004, Maggie starred in Tony Kushner’s play Homebody/Kabul, which ran in both Los Angeles and at B.A.M. Next, Maggie will be seen alongside Peter Sarsgaard and Mamie Gummer in Uncle Vanya by Anton Chekhov.

Maggie made her feature film debut in 1992, alongside Jeremy Irons and Ethan Hawke in WATERLAND. This was followed by a memorable performance as “Raven,” the Satan worshipping make-up artist in John Waters’ quirky Hollywood satire, CECIL B. DEMENTED, which led her to a co-starring role in DONNIE DARKO, a fantasy-thriller about disturbed adolescence.