Huffington Post/Tim Taliaferro—The Chicago Cubs have reached a baseball milestone and it has nothing to do with their century-plus World Series drought.

With the team’s purchase by the Ricketts Family, the Cubs are the first Major League Baseball team to have an openly gay owner.

Among the new owners is Laura Ricketts, an out lesbian who is also on the board of the gay rights organization Lambda Legal, the Windy City Times reports.

Ricketts, who is a member of the Cubs board of directors, came out to her family in her 30’s.

“I think for a long time I wasn’t really out to myself growing up in Omaha, Neb., to a Catholic conservative family,” Ricketts said. “It took me a while to come out to myself and not long after that I came out to them. I think that it really couldn’t of been a better experience. They were all immediately supportive. … I have been really really fortunate in that regard.”

The Ricketts family bought the Cubs and Wrigley Field from the Tribune Co. for $845 million in a deal that was finalized Oct. 27. 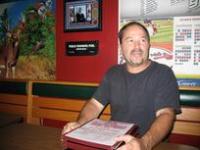 Patrick Lanzo, 53, says his family has been in the restaurant business for 50 years. He's seated in the bar, where a “Whites Only” swimming pool sign sits underneath a portrait of President Obama.

Atlanta Journal-Constitution/Alexis Stevens—People come from all over to eat the fresh, fried seafood and drink a cold beer at this small bar on a rural highway at the Paulding-Haralson county line.

But some people just drive by to read the sign outside. It says something different every once in a while, depending on what bar owner Patrick Lanzo has on his mind. Politics are frequent topics, and former President Bill Clinton and congresswoman Cynthia McKinney have been targeted in the past.

The current sign, which has been outside the Georgia Peach Museum and Restaurant for about six months, takes a critical stand against President Barack Obama’s healthcare plan.

But it’s not just a simple message. It contains an “n” word many see as a racial slur. Find that offensive? Well just keep on driving, says Lanzo, who has run the bar for 22 years. (Note: Just for clarity the sign reads, “Obamas plan for health-care: N****r rig it“)

Lanzo contends the word is only labeled “racist” when it’s uttered by a white person. Similarly, he says white people referring to themselves as “crackers” aren’t labeled racists.

Racist or not, it’s a word Lanzo uses often. Many of the statements on his signs have included the word.

Alan Colmes on his radio show Liberaland, gave Lanzo a chance to explain why he chose to use the n-word on his sign.

Listen here, if you have the stomach for it, Lazlo really felt free enough on radio to let it all hang out, so to speak. Lazlo is the owner of the Georgia Peach Museum and Restaurant — which declares that it is “the original Klan bar” on its website.