“Name the most powerful narcotic in the world,” he asks the former beggar boy. “Oil,” the mentor says. ” More than opium, more than heroin. The pipelines are syringes. The addicts pay anything for their supply, kill for it, steal for it, topple governments for it.” 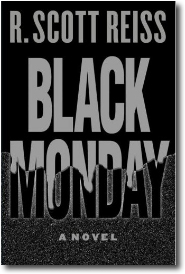 This gripping, high-concept thriller about an oil-eating microbe is written by best-selling author R. Scott Reiss. “Black Monday” is in movie development for release in 2012.

When the first planes go down — in Europe, in California, in Asia — authorities blame terrorists. All flights are grounded as world leaders try to figure out how the global assault has been coordinated. And when cars, ships, and factories stop running too, it becomes clear that the common link is oil. Somehow a microbe, genetically engineered to destroy petroleum, has infected the world supply. The world descends into a new dark age.

Dr. Gregory Gillette, an epidemiologist with the Centers for Disease Control, is a disease hunter specializing in microbes that attack human beings. When the Pentagon taps him to be part of the Rapid Response Team assembled to track and kill the devastating Delta-3 bacteria, he quickly discovers that his expertise is ignored, his presence meaningless. The leader of the task force is an old nemesis who sidelines Gillette.

Gillette returns home to Washington, where he watches in horror as food becomes scarce, neighbor attacks neighbor, and government collapses. With winter approaching, the capital faces anarchy and Gillette faces a choice: to stay with his family or to disobey orders and find the microbes’ antidote through clues that may not even be real.

“Black Monday is an involving thriller with a timely theme. The author’s use of the present tense provides an excitement and immediacy that rapidly propel the narrative forward…Reiss includes enough solid detail to make his improbable plot seem almost realistic. He handles his complicated scientific explanations with aplomb, takes the time to focus on a variety of compelling characters, and creates a terrifying scenario that will make thoughtful readers think twice about the world’s dependence on the ultimate narcotic–oil.”~~Mostly Fiction Book Reviews