The conspiracy theorists can chill out….

Michael Hilton, the American Police Force official who signed a deal to have APF take charge of a prison in Hardin, Montana, may have a lengthy criminal record and a history of alcoholism — but everyone deserves a second chance.

That’s the charitable view of Al Peterson, the Hardin economic development official involved in striking the deal with Hilton and APF.

Asked by TPMmuckraker whether he and his colleagues were aware of Hilton’s track record when it got involved with APF, Peterson replied that they were, but were willing to overlook it.

“He was an alcoholic, and everybody knows that,” said Peterson of Hilton. “Did he do some not-the-best choices in his personal and professional life when he was not sober? Absolutely. He made some very unwise decisions.”

But, argued Peterson, that shouldn’t be held against him forever. “Hey, he’s served his time,” Peterson said. “Is the guy not entitled to try to do something with his life from here on out?”

California Jail Entrepreneur Has Checkered Past

AP/Matthew Brown—Michael Hilton pitched himself to officials in Hardin, Mont. as a military veteran turned private sector entrepreneur, a California defense contractor with extensive government contracts who promised to turn the rural city’s empty jail into a cash cow.

Hardin’s leaders were desperate to fill the $27 million jail, which has sat empty since its 2007 completion.

So when Hilton came to town last week — wearing a military-style uniform and offering three Mercedes SUVs for use by local law enforcement — he was greeted with hugs by some grateful residents. The promise of more than 200 new jobs for a community struggling long before the recession hit had won them over.

But public documents and interviews with Hilton’s associates and legal adversaries offer a different picture, that of a convicted felon with a number of aliases, a string of legal judgments against him, two bankruptcies and a decades-long reputation for deals gone bad.

American Police Force is the company Hilton formed in March to take over the Hardin jail.

“Such schemes you cannot believe,” said Joseph Carella, an Orange County, Calif. doctor and co-defendant with Hilton in a real estate fraud case that resulted in a civil judgment against Hilton and several others.

“The guy’s brilliant. If he had been able to do honest work, he probably would have been a gazillionaire,” Carella said.

As for Hilton’s military expertise, including his claim to have advised forces in Iraq and Afghanistan, those interviewed knew of no such feats. Instead, Hilton was described alternately by those who know him as an arts dealer, cook, restaurant owner, land developer, loan broker and car salesman — always with a moneymaking scheme in the works.

When asked about court records detailing Hilton’s past, Shay replied, “The documents speak for themselves. If anyone has found public documents, the documents are what they are.” 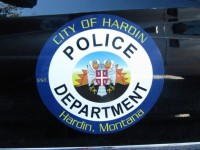 The logo on one of three Mercedes SUV brought to Hardin by American Police Force. The city has not had a police force for three decades.

Al Peterson, vice president of Hardin’s Two Rivers Authority, which built the jail, declined to comment on Hilton’s legal troubles. He refused to say if he knew about Hilton’s past when the authority reached a 10-year agreement with American Police Force last month.

The deal is worth more than $2.6 million a year, according to city leaders.

Hilton has also pledged to build a $17 million military and law enforcement training center. And he’s promised to dispatch security to patrol Hardin’s streets, build an animal shelter and a homeless shelter and offer free health care to city resident’s out of the jail’s clinic.

Those additional promises were not included in the jail agreement, which remains in limbo because US Bank has so far declined to sign off on the contract. The bank is the trustee for the bonds used to fund the jail.

HARDIN – The California-based security company planning to take over the Hardin jail promises to hire dozens of local employees. Last week they made their first local hire when they signed former Billings Gazette reporter Becky Shay as their director of public relations.
Shay still needs a map to get around the 114,000 square foot facility. With 20 years of reporting under her belt, Shay said she’s more comfortable with a pen in her hand and topping her to-do list is purchasing new reporter’s notebooks.
“I’ve got printer’s ink in my blood,” she said.
On Friday, Shay shocked local media when she handed in her resignation at the Billings Gazette and began working for American Police Force. Less than 24 hours after taking the job Shay held her first press conference. full story: From KULR8-TV