Yeah, right. Sit down with a friend over lunch and try to have a conversation about health care, climate change, financial regulation or Afghanistan without straying at least once onto the oh-so-unimportant subject of Tiger Woods’s philandering. I’ve given up trying to deny that the unfolding saga is compelling, even if paying attention leaves me feeling a bit disappointed in myself. Prurient interest is rarely something to be proud of.

I’m beginning to fear, actually, that the unfolding may never end. If you’re the richest, most famous athlete on the planet, and you have an eye for cocktail waitresses and nightclub hostesses, the opportunities to cheat are probably limited only by the number of hours in the day. It’s becoming clear why Woods’s initial mea culpa was worded vaguely to cover any and all “transgressions.” Wouldn’t want to leave anybody out.

I’m not going to pronounce judgment on Woods’s moral fiber, except to state that adultery is bad. I’m also not going to judge the women who have reportedly had affairs with him, except to point out how quick they’ve been, as soon as their names have surfaced, to retain high-priced legal counsel. I will suggest that Woods consider this possibility: Random women he meets in restaurants or bars may not be reduced to putty by his good looks or sparkling wit, but may in fact be aware of how wealthy he is.

I was going to critique Woods’s technique of adultery, or at least his apparent selection of playmates, as measured against a theory about philandering developed by my colleague Roxanne Roberts, who has spent years covering the capital’s libidinous social scene for The Post. Roberts postulates that famous, powerful men who stray would be smart to choose women who have just as much to lose if the liaison were exposed. Some ultra-rich tycoon’s young trophy wife, say, would fit that criterion. Cocktail waitresses and nightclub hostesses, not so much.

In fact, Woods seems to have hooked up with the kind of women who save old voice mails and text messages — giving their high-priced legal counsel something to work with. 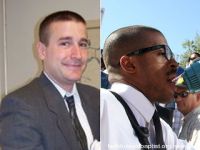 “We are aware of the situation and appropriate follow up will be conducted.”

Broughton is the member of Anderson’s Faithful Word Baptist Church who brought an AR-15 rifle and a hand gun to an Obama event in Phoenix earlier this month. Anderson later confirmed to TPMmuckraker that just 24 hours before that show of arms-bearing, Broughton attended the pastor’s fiery sermon in which he prayed for “Obama to melt like a snail tonight” for being a “socialist devil, murderer, infanticide.”

And yesterday, Broughton and Anderson took their statements even further, with the pastor saying he’d like Obama to die of brain cancer like Ted Kennedy, and Broughton for the first time publicly saying that he, too, would like the president to be dead.

No word on what form the Secret Service’s follow up will take. And the agency would not comment on a CNN report that it interviewed Anderson.

I have a couple of questions about these events.

First, when are the Republican leader’s going to stand up against this thuggery and treason? Nobody disliked President Bush and his policies more than me. But never in my wildest-dreams did I pray for him to DIE. Come on now…that’s just beyond the pale.

Secondly, shouldn’t the IRS be involved with this Paster Anderson’s actions? Its obviously against the law to preach politics from the pulpit. Shouldn’t someone be looking into having the Faithful Word Baptist Church’s tax exempt status removed?

I am sick and tired of the MSM’s unsettling fascination with these crazies. Yes, I know, in our culture outlandish behavior is always rewarded by 15 minutes of fame. But someone has got to be the adult here, and say enough is enough.