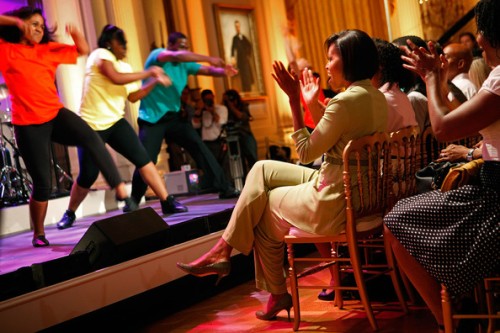 First Lady Michelle Obama cheers and applauds during a dress rehearsal of 20 dance students from Duke Ellington School of the Arts and the Joy of Motion Dance Center ahead of the White House music series celebrating the arts featuring Broadway performers in the East Room of the White House July 19, 2010 in Washington, DC. As part of the music series, the students are participating in an educational workshop and rehearsal of a segment from the Broadway show, Hairspray. (Photo by Chip Somodevilla/Getty Images North America)

This afternoon, dance students from the local Duke Ellington School of the Arts and the Joy of Motion Dance Center worked with Tony Award winning choreographer Jerry Mitchell on a segment from the Broadway show Hairspray. The youth ensemble came to the White House to perform in a special dress rehearsal for the First Lady, their parents and teachers, before joining the ranks of some of Broadway’s most prestigious performers.

“Just in this performance, you have strengthened the bond between two great nations. Imagine that,” said Mrs. Obama following a music and dance program at the Duke Ellington School for the Arts in Washington, DC. First Lady Michelle Obama was joined by the First Lady of Russia, Mrs. Svetlana Medvedev.

Arts education and engaging young people around the world are priorities for both First Ladies. During the President and First Lady’s visit to Russia last summer, Mrs. Medvedev and Mrs. Obama attended a performance by the Moiseyev Dance Company with an audience of Russian youth.

Mrs. Obama spoke to the students about the potential of the arts:

And I think that should give us all cause for hope, all around the world, because we know that ultimately, relationships between nations aren’t just about relationships between presidents and prime ministers, or first ladies, for that matter. The real foundation of these relationships are about the connections between ordinary citizens, particularly between young people. You all are leading the way in this movement.

She spoke about their shared priority to engage youth:

That’s why engaging young people across the globe is such a priority for me, and I know it is for Mrs. Medvedev as well, because her country, like ours, is a place that cares deeply about culture and about the young people who carry it forward…And as I travel around the world, I want young people everywhere to know that the United States believes in them and cares about their future. It is so important for us to continue to lift up the next generation, not just here in this country but your peers around the world.

“It’s up to you,” said Mrs. Medvedev, “Up to the young people of both countries, to build the world that will be a world of friendship and cooperation between our states and between our governments.”