The Death of U.S. Political Democracy For The People

Mark your calendars, folks. January 21, 2010 is the day the radical and activist Supreme Court of the United States delivered the U.S. Democracy into the hands of the corporate sector and special interests groups. According to an article in the New York Times corporations, lobbyists and unions can now legally purchase their candidates of choice.

“We have got a million we can spend advertising for you or against you – whichever one you want,’ ” a lobbyist can tell lawmakers, said Lawrence M. Noble, a lawyer at Skadden Arps in Washington and former general counsel of the Federal Election Commission.

The decision yesterday will usher in unimaginable numbers of Swift Boat attack ads. Corporate fat cats can now threaten and bully politicians to do their bidding or else.

“Parties will sort of shrink in the relative importance of things,” he added, “and outside groups will take over more of the functions – advertising support, get out the vote – that parties do now.” 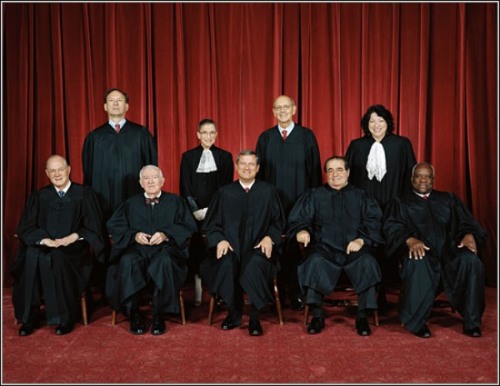 Some have called the SOTUS decision a power grab that is intellectually dishonest.

In opening the floodgates for corporate money in election campaigns, the Supreme Court did not simply engage in a brazen power grab. It did so in an opinion stunning in its intellectual dishonesty.

Many of those commenting on the decision in Citizens United v. Federal Election Commission have focused on the power-grab part. I agree with them. It was unnecessary for the court to go so far when there were several less-radical grounds available. It was audacious to seize the opportunity to overrule precedents when the parties had not pressed this issue and the lower courts had not considered it. It was the height of activism to usurp the judgments of Congress and state legislatures about how best to prevent corruption of the political process.

Republicans naturally and predictably love this recent ruling. But of course they would. Republicans embrace and fully support authoritarian forms of government. And the sad truth of the matter is the GOP has always worked for the corporate sector.

It is devastatingly unfortunate that Republican voters have never been able to understand the hard, cold and mean reality of those they elect into office. Politicians take an oath to serve the people in their districts but many merely give their constituents nothing but empty rhetoric. If one were to closely examine one’s Republican lawmakers’ voting records one would find who their elected officials really work for.

My guess is the teabaggers will wraps it head around the reality of the SCOTUS decision like we progressives have, for the only one imperative we do share in common is a collective outrage over the corporate takeover of the U.S. government and its legislative process by special interest groups and corporations.

But unfortunately teabaggers, unlike progressives, are far too easily led astray by the likes of Dick Armey, one of the numerous behind the scenes leaders of the teabagger movement. Armey’s main mission is to promote the interests of the health care industry. He and his organization, Freedom Works, uses teabaggers as its tools.

Republicans and teabaggers alike have been led to believe that the government is the root of everything evil while progressives know that government is the only force that can and will protect us from the evils of self-serving greed mongers of the corporate sector.

We are where we are today b/c the corporate sector has been enabled to run rough shod over the American people. We are broke. There are no jobs. We lost homes. We lost retirement savings. Meanwhile on Wall St. the fat cats who can now purchase politicians get richer by the minute.

Elections have consequences. The nice guy or girl candidate with whom to have a beer could very well be an anti-political democracy devil in disguise who has every intention of throwing the middle and working classes to the lions.

Oh, and Prince Alwaleed, grandson of the King of Saudi Arabia and the largest individual shareholder in Citigroup and second biggest shareholder in News Corp (Murdock’s FOX “News”) doesn’t like Obama’s tax on the banks.

Who would have thought?

WhiteHouse.gov—President Obama Addresses This Week’s Supreme Court Decision~~In this week’s address, President Barack Obama addresses the Supreme Court decision to further empower corporations to use their financial clout to directly influence elections and vows that “as long as I’m your President, I’ll never stop fighting to make sure that the most powerful voice in Washington belongs to you.”

Republicans ruled for 80% of the last decade, 60% of which Republicans were in total control

At least when W. ran his companies into the ground Daddy’s friends would step up and bail junior out. But Daddy’s buddies are nowhere to be found now that W. and his GOP drove the country straight to hell. Tragically for the American taxpayers, we, our children, our grandchildren and great grandchildren will have to clean up the squalor. It will take generations to undo the GOP’s financial carnage.

A recent article published in the Washington Post reveals that the American worker lost big time during the past decade.

This news should come as no surprise to any hard working middle class American. We have been living the pain for 10 long years.

The past decade was the worst for the U.S. economy in modern times, a sharp reversal from a long period of prosperity that is leading economists and policymakers to fundamentally rethink the underpinnings of the nation’s growth.

It was, according to a wide range of data, a lost decade for American workers. The decade began in a moment of triumphalism — there was a current of thought among economists in 1999 that recessions were a thing of the past. By the end, there were two, bookends to a debt-driven expansion that was neither robust nor sustainable.

The Washington Post also reveals that there has been zero net job creation since December 1999. Conditions have not been this grim for decades. Essentially, the American worker has not had a raise in a very long time.

Middle-income households made less in 2008, when adjusted for inflation, than they did in 1999 — and the number is sure to have declined further during a difficult 2009. The Aughts were the first decade of falling median incomes since figures were first compiled in the 1960s.

As we well know, our home values have declined as have our retirement and savings accounts.

Economists attribute the decline to economic stagnation, an out of control housing bubble, too much risk and too much debt. Money was invested in mini mansions instead of business investments that would have created jobs and economic growth.

The housing bubble both caused, and was enabled by, a boom in indebtedness. Total household debt rose 117 percent from 1999 to its peak in early 2008, according to Federal Reserve data, as Americans borrowed to buy ever more expensive homes and to support consumption more generally.

An experiment called an unbridled free market economy ended very badly for we the people.

The first decade of the new century was an experiment in what happens when an economy comes to rely heavily on borrowed money.

“A big part of what happened this decade was that people engaged in excessively risky behavior without realizing the risks associated,” said Karen Dynan, co-director of economic studies at the Brookings Institution. “It’s true not just among consumers but among regulators, financial institutions, lenders, everyone.”

The experiment has ended badly. While the stock market bubble that popped in 2000 caused only a mild recession, the housing and credit bubble has had a much greater punch — driving the unemployment rate to a high, so far, of 10.2 percent, compared with a peak of 6.3 percent following the last such downturn.

In short, the big banks, enabled by Republican free market ideology, gambled with our money and they lost it. And they lost it big time. As we know we the taxpayer had to step up and bail out the banks so there would not be a complete and thoroughly devastating global economic melt down.

The G.W. Bush era was one in which the GOP rewarded every one of its fat cat sugar daddies, including Halliburton with its no bid contracts for a ginned up war called Iraq.

We the people are dearly paying the price for the Bush era’s unforgivable mistakes.

I am with Dylan Ratigan on this one. The banks should pay the taxpayers back with interest. Why on earth did Hank Paulson give away our money with no strings attached? What was he thinking?

So next time we hear about the virtues of an unbridled free market economy we need to say no way in hell. Any politician who embraces this voodoo notion of economic devastation should be run out of office on a rail for they are unfit to serve the people.

Speaking of unfitness to serve, why is that Republicans have to blame their short comings on others? Why can’t Republicans ever step up and take responsibility for their mistakes?

Republicans are obviously inept at running the economy and they are also incompetent at keeping our nation safe whether from terrorist attacks or national disasters like Hurricane Katrina. It seems that the only thing Republicans are good at is playing the blame game.

A coordinated, successful attack, with sufficient warning, carried out by 19 terrorists, killing 2,973 people, on the 234th day of an administration… that’s completely and totally and absolutely and so gosh-durn’t the fault of the previous President… who happened to be a Democrat.

HOWEVER, an unsuccessful attack, attempted by 1 terrorist, killing absolutely no one on the 339th day of an administration… that’s completely and totally and absolutely and so gosh-durn’t the fault of the current President… who happens to be a Democrat.

SIMILARLY, a complete and total meltdown of the financial system, including a stock market collapse and levels of bankruptcy/foreclosure not seen since the Great Depression on, or around, the 2415th day of an administration… that’s completely and totally and absolutely and so gosh-durn’t the fault of the previous President (and Congress)… who created Acorn, and just happened to be Democrats.

BUT, 10% unemployment and lackluster job growth on the 215th day of an administration… that’s completely and totally and absolutely and so gosh-durn’t the fault of the current President (and Congress)… who want to institute socialism (in the form of Acorn) and happen to be Democrats.

NOW, making a statement from your “brush farm” 144 hours after a dude with bad facial hair is prevented from blowing up an airplane… that’s fighting some serious war on the baddies.

AND YET, making a statement from the beach 72 hours after a dude with bad genital burns is prevented from blowing up an airplane… that’s “pretending the war on terror doesn’t exist“.

If folks really have a desire to destroy what is left of their financial security, go ahead and continue to vote for Republicans. Hopefully most of us won’t have this death wish in November.

House Minority Leader John Boehner's PAC spent $550,000 on travel and entertainment expenses around the country, more than any other lawmaker, according to a ABC News/ProPublica analysis of disclosure data. In the past three years, Boehner has travelled to Palm Springs, CA; Boca Raton, FL; and Scottsdale, AZ to raise money for his PAC

For people who love golf, the chance to play at the five-star Greenbrier resort in West Virginia is a dream come true. Especially if someone else pays for it. That was the case this summer for two powerful members of Congress, House Republican Minority leader John Boehner of Ohio and Republican Sen. Saxby Chambliss of Georgia.

Accompanied by top corporate lobbyists , the two golf-loving Republicans spent a luxurious weekend at the Greenbrier, the kinds of cozy gatherings new ethics reform laws were supposed to curb.