Haunted Salem! Your Guide to the Witch City

Salem, Massachusetts is home to a world of haunting enchantments. Walk the narrow streets of our “Witch City” and you will pass unusual shops, strange museums, and travel through time as you read the epitaphs of history on one of our many colonial graves. Meet real Salem Witches who are waiting to guide you through our city’s mysteries. Shop mystical emporiums that will entice you with treasures found nowhere else. Scare yourself with one of our several family oriented haunted attractions. Take a tour of the Witch City’s streets with a guide who can introduce you to real local haunts.

The infamous Witch Trials of 1692 gave birth to a heritage that Salem cannot deny. Today, we in Salem embrace our past and strive to present it to our guests in a way that gives respect to those who lost their lives to intolerance. Listen closely to the whispers on the winds and you will hear the cry of these innocent victims of the Witchcraft hysteria. Experience the Witch trials firsthand by visiting one of our many museums that are dedication to them.

The Curse of Giles Corey

One of Salem’s most famous Witch Trial victims of 1692 was Giles Corey, who, along with his wife Martha, died during the hysteria that swept our city over three hundred years ago. 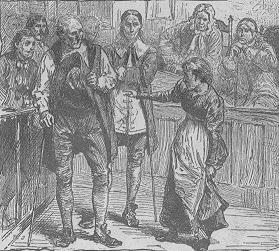 The Accusation of Giles Corey. From Another Drawing of the Salem Witchcraft Trials

Giles initially supported the claims against his wife (was it her cooking?), offering “evidence” that his wife had been “muttering” through her chores. He soon recanted, however, when he became aware of the severity of the prosecution and what lay in store for those accused.

According to the laws of the time—which were the source of much confusion, given that Salem had been operating without a charter for many months—the wealth and property of the accused could be confiscated if he were found guilty of the crime of Witchcraft. This would leave the heirs of those accused without inheritance. However, a person could not be found guilty or innocent if he refused to enter a plea, thereby protecting his possessions for his family.

Such a tactic, though, came with a terrible price. In order to extract a plea, authorities would place boards across the silent “criminal,” piling the boards with heavy stones until the accused made a plea of guilty or innocent.

It was this very tactic that Giles Corey used. Knowing that he would be found guilty no matter what his plea, Giles made the difficult choice to endure this Puritan form of torture that his children would inherit the fruits of his hard labor.

Sheriff George Corwin, much reviled son of Witch Trials magistrate Jonathan Corwin, profited greatly from the trials, confiscating property and dividing the spoils. It was he who presided over the crushing of Giles Corey, which took place at a field that is now Howard Cemetery, overlooked by the old Salem Jail. 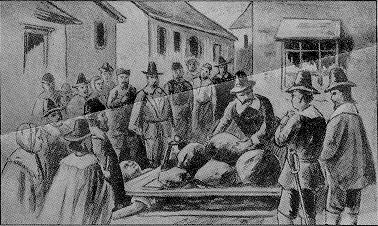 It was later said that, as stones continued to be places atop the wooden door covering Giles Corey, that all he would say is “more weight.” While this is more likely the results of folklore, what is reputed by witnesses of the time to have been said is far more damning in retrospect. With his dying breath, Giles Corey addressed Sheriff Corwin “Damn you Sheriff I curse you and Salem!”

Local Salem historian and former High Sheriff of Essex County Robert Ellis Cahill discovered some years ago that the curse of Giles Corey may have come to bear. He notes that each and every Sheriff down from George Corwin to himself, each headquartered at the Salem Jail overlooking the the place where Corey was killed, had died while in office or had been forced out of his post as the result of a heart or blood ailment. Corwin himself died in 1696, not long after the trials, of a heart attack. Thankfully, Cahill’s heart attack and subsequent blood ailment forced him into retirement and not into an early grave, for he later went on to chronicle many strange stories of New England’s past. 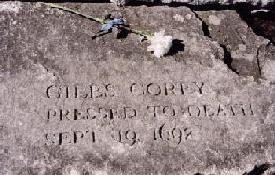 The Curse of Giles Corey was not just leveled at the Sheriff but at “all of Salem.” It is said that each time Salem has undergone a major tragedy (such as the great fire that nearly destroyed the town), it was not long after a claimed sighting of the ghost of Giles Corey. Coincidence? Perhaps. Still, could the words spoken by this tragic victim of hysteria have left an imprint that is still at work in Salem today?

Sources: HauntedSalem.com, Haunted Happenings by Robert Ellis Cahill, A Delusion of Satan: The Full Story of the Salem Witch Trials by Frances Hill

The Salem Witch Museum
The Salem Witch Museum brings you back to Salem 1692, a time of hysteria and fear that ended with the deaths of twenty innocent people. Using life size figures, stage sets, a sound track narration and lighting, the museum recreates the accusers and accused, the court proceedings and finally the execution of the victims of this terrifying wave of persecution. The thought-provoking narration invites visitors to ponder questions of human rights and tolerance that affect contemporary life and determine for themselves how a witch hunt can occur.

The Witch Dungeon Museum
An award-winning live reenactment of a witch trial from the original transcript of 1692 followed by a guided tour through the dungeon.

Witch History Museum
Experience the characters and untold stories of the 1692 witch hysteria. Learn the fate of the victims as a guide brings you back in time in Old Salem Village where you will view 15 life-size scenes.

Gallows Hill Park
In 1692, at what is now a baseball field and children’s park, twenty innocent people were condemned to die. Nineteen were hanged while one was crushed under heavy stones. Each year at Halloween, Salem Witches hold a public circle to commemorate those who died as part of the hysteria. They also honor all those who died for freedom, including great leaders of recent past. Following the ritual, the Witches hold a candlelight procession to the center of town.

The Witch House
This historic house, built in 1642, earned its name because it was once the home of Judge Jonathan Corwin, who helped preside over the infamous Salem Witch Trials of 1692. The accused were often brought here to be examined for supposed “Witches’ marks“.

Back to Halloween Main Page