In the tragic aftermath of Haiti’s 7.0 earthquake, images of the disaster break our hearts and remind us of the fragility of life. What America must do now—and why

By President Barack Obama in 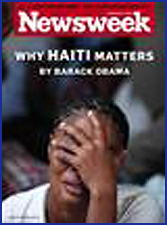 In the last week, we have been deeply moved by the heartbreaking images of the devastation in Haiti: parents searching through rubble for sons and daughters; children, frightened and alone, looking for their mothers and fathers. At this moment, entire parts of Port-au-Prince are in ruins, as families seek shelter in makeshift camps. It is a horrific scene of shattered lives in a poor nation that has already suffered so much.

In response, I have ordered a swift, coordinated, and aggressive effort to save lives in Haiti. We have launched one of the largest relief efforts in recent history. I have instructed the leaders of all agencies to make our response a top priority across the federal government. We are mobilizing every element of our national capacity: the resources of development agencies, the strength of our armed forces, and most important, the compassion of the American people. And we are working closely with the Haitian government, the United Nations, and the many international partners who are also aiding in this extraordinary effort.

We act for the sake of the thousands of American citizens who are in Haiti, and for their families back home; for the sake of the Haitian people who have been stricken with a tragic history, even as they have shown great resilience; and we act because of the close ties that we have with a neighbor that is only a few hundred miles to the south.

But above all, we act for a very simple reason: in times of tragedy, the United States of America steps forward and helps. That is who we are. That is what we do. For decades, America’s leadership has been founded in part on the fact that we do not use our power to subjugate others, we use it to lift them up—whether it was rebuilding our former adversaries after World War II, dropping food and water to the people of Berlin, or helping the people of Bosnia and Kosovo rebuild their lives and their nations.

At no time is that more true than in moments of great peril and human suffering. It is why we have acted to help people combat the scourge of HIV/AIDS in Africa, or to recover from a catastrophic tsunami in Asia. When we show not just our power, but also our compassion, the world looks to us with a mixture of awe and admiration. That advances our leadership. That shows the character of our country. And it is why every American can look at this relief effort with the pride of knowing that America is acting on behalf of our common humanity.

Right now, our search-and-rescue teams are on the ground, pulling people from the rubble. Americans from Virginia and California and Florida have worked round the clock to save people whom they’ve never met. Our soldiers, sailors, airmen, Marines, and Coast Guardsmen quickly deployed to the scene. Hand in hand with our civilians, they’re laboring day and night to facilitate a massive logistical enterprise; to deliver and distribute food, water, and medicine to save lives; and to prevent an even larger humanitarian catastrophe.

Citizens for Real Health Care Reform and a PUBLIC OPTION

Moments ago, the Senate voted to begin its full debate on historic health care reform legislation instead of obstructing it with a filibuster.

Tonight’s vote marks the biggest victory to date for our grassroots effort to pass health care reform with a public option. We cannot give enough thanks to the over 100,000 signers of our petition at CitizensForAPublicOption.com for helping to fundamentally shift the momentum towards meaningful reform.

Not long ago, a few loud opponents of reform armed and organized by the insurance industry dominated this debate. Now the American people, the majority of whom support a public option, have spoken out and gained the upper hand.

Not long ago, the public option seemed like little more than a pipe dream. Now it’s part of health care bills in both the Senate and the House.

Not long ago, members of our own Democratic caucus weren’t sure they could even support an up-or-down vote on health care reform legislation. Tonight they voted to end the Republican filibuster.

But despite this good news, the fight for meaningful health care reform is not over. As we debate amendments to this legislation in the coming weeks, we will work with our colleagues to ensure it continues to address the “Three C’s” of meaningful reform: competition, choice, and cost reduction. And we will firmly oppose any effort to eliminate the public option.

Tonight we celebrate a milestone no one thought we could reach just months ago. Tomorrow the fight continues. We will not let up until the President signs a bill we can all be proud of.

Thank you for your support.

Posted by Audiegrl
Today’s statement from the White House says that it will release the names of visitors. Three to four months after the visit they will be posted online. This does not apply to visits that are regarding national security, or extreme confidentiality, or visits to the First Family that are of a personal nature.

This new move will end the lawsuits filed by Citizens for Responsibility and Ethics (CREW), a Washington based watchdog group. You can read more about what CREW is calling a ‘historic legal settlement‘ here.

Aside from a small group of appointments that cannot be disclosed because of national security imperatives or their necessarily confidential nature (such as a visit by a possible Supreme Court nominee), the record of every visitor who comes to the White House for an appointment, a tour, or to conduct business will be released.

Previous administrations fought disclosure of White House visitor logs in court. This administration began a review of the policy during its first days in office.

Citizens for Responsibility and Ethics in Washington (CREW), a government reform organization which has long objected to administrations keeping White House visitor logs secret, said in a statement from its executive director Melanie Sloan:

The administration thanks CREW for their participation in the development of this new policy.