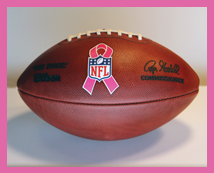 The NFL and hundreds of other organizations are joining together to raise awareness about Breast Cancer and to raise money for research towards a cure….

The National Breast Cancer Awareness Month (NBCAM) program is dedicated to increasing awareness about the importance of the early detection of breast cancer through a nationwide campaign held in October. NBCAM started as a weeklong campaign in 1985 with 2 founding members. Today the American Cancer Society is one of many national public service organizations, professional associations, and government agencies that form the NBCAM Board of Sponsors.

During NBCAM, the member organizations of the Board of Sponsors join forces to spread the message that early detection of breast cancer followed by prompt treatment saves lives.
More Life Saving Information Here: American Cancer Society