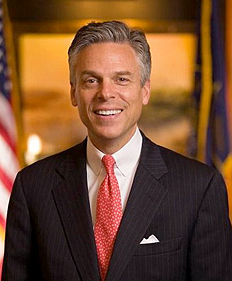 AP/Christopher Bodeen—Washington’s ambassador to Beijing hit out Friday at negative U.S. media coverage of President Barack Obama’s visit to China, saying it failed to take into account important progress on many issues.

Although producing no breakthroughs on key issues, Obama’s first state visit to the Asian giant that ended Wednesday was heralded by both sides as a success.

The trip was the top news story in China, drawing strong interest from the Chinese public who, surveys suggest, are largely positive in their view of the American president.

However, much of the U.S. media coverage was strongly negative, accusing Obama of failing to gain concessions on key issues such as Iran’s nuclear program and climate change, as well as being weak on human rights.

Ambassador Jon Huntsman said the reports missed the fact that the visit had yielded important progress on cooperation in areas such as clean energy, military-to-military exchanges and stopping the spread of nuclear weapons.

“I attended all those meetings that President Obama had with Hu Jintao and Wen Jiabao,” Huntsman said, referring to the Chinese president and premier.

“I’ve got to say some of the reporting I saw afterward was off the mark. I saw sweeping comments about things that apparently weren’t talked about, when they were discussed in great detail in the meetings,” he said.

Huntsman made the comments during a question-and-answer session with Chinese and American students attending an international relations program at elite Peking University.

He said criticism about limited Chinese exposure for Obama’s remarks at a town hall-style meeting with students in Shanghai failed to consider the ubiquity of the Internet and blogging in China, where 350 million people use the Web.

“Go check some time and see how messages bounce around from Web site to Web site and blogger to blogger for a very long period of time and you’ll get a sense of what the communication revolution is all about,” Huntsman said.

BEIJING (AFP) – – Chinese meteorologists covered Beijing in snow Sunday after seeding clouds to bring winter weather to the capital in an effort to combat a lingering drought, state media reported.

The unusually early snow blanketed the capital from Sunday morning and kept falling for half the day, helped by temperatures as low as minus 2 Celsius (29 Fahrenheit) and strong winds from the north, Xinhua news agency reported.

Besides falling in the northeastern provinces of Liaoning and Jilin and the northern province of Hebei, the eastern port city of Tianjin also got its first snow of the autumn, the report said.

“We wont miss any opportunity of artificial precipitation since Beijing is suffering from the lingering drought,” the report quoted Zhang Qiang, head of the Beijing Weather Modification Office, as saying.

Chinese meteorologists have for years sought to make rain by injecting special chemicals into clouds.

Although the technique often gets results, a drought in the north of the country has continued for over a decade.

Besides the snow, which the Beijing Evening News said was the earliest to hit the capital in 10 years, the cold weather and strong winds also delayed air travel from Beijing’s Capital Airport, while interrupting passenger shipping services off the coast of Shandong province in the east, Xinhua said.
Read the story Here:

Russia, Belarus and the Ethics of Cloud Seeding