‘Judged by the standard of influencing the conversation, Think Progress is flourishing.’~Politico

The 44D’s just wanted to take a moment and celebrate the blogger’s at ThinkProgress and the TP community. It’s not often that the MSM gives blogger’s recognition for all the hard work they do, even when they use blogger’s reporting in their own stories. Today, hopefully will mark a turning point in that behavior, and investigative blogger’s will earn the respect they so genuinely deserve.

Thank you TP for providing both excellent reporting and a place for honest political discussion. 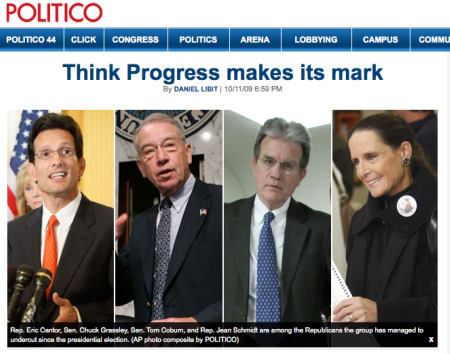 Politico/Daniel Libit—Can a liberal blog launched in the midst of the Bush era – a blog that once obsessed over Alberto Gonzales, Donald Rumsfeld, Karl Rove and the outing of Valerie Plame – still make its mark in the age of Obama?

In the case of Think Progress, the answer so far is yes.

Since January, the online arm of the Center for American Progress Action Fund has embraced its new role as the pin to prick the air out of Obama opposition — largely by offering up evidence that powerful Washington interests are fertilizing grassroots conservative anger.

In April, Think Progress was the first to highlight former House Majority Leader Dick Armey’s dual role as a lobbyist for a pharmaceutical company at DLA Piper and as the chairman of FreedomWorks, which has helped organize grassroots attacks on health care reform.

In the media uproar that followed, Armey quit his DLA Piper job and Editor Faiz Shakir says the controversy called into question whether the movement against the president was astroturfed.

In the ensuing months, Think Progress’s trackers and bloggers have tried to make that point with videos and posts that undercut the opponents of President Barack Obama’s agenda.

Brought to you by Max Blumenthal and Alternet.org

Max Blumenthal covers the 9.12 anti-Obama rally on the National Mall, where teabaggers demonstrated their opposition to healthcare reform by calling Obama the biggest Nazi in the world, claiming he wants to put “real” Americans in concentration camps, and was born in Kenya.

But how many of them have health insurance, and do they know they’re pawns in the game of healthcare industry front man Dick Armey? Of course not.

In his article, 9/12 Protest: Here’s What Fox News Didn’t Broadcast, Max explains what he witnessed in Washington:

My video tour of the 9.12 Project is yet another exhibit of how the Republican Party’s big tent became a one-ring circus that operates according to the rules of P.T. Barnum: “There’s a sucker born every minute.”

For the inside story of how the radical right took over the GOP and drove it to the margins, check out Max’s new book, “Republican Gomorrah: Inside The Movement That Shattered The Party”

When Cantor mentions Obama, GOP rally interrupts with howls of ‘he’s a liar.’

ThinkProgress/Lee Fang—Yesterday, Dick Armey’s FreedomWorks and the Association of American Physicians and Surgeons, an anti-health reform group pushing for the privatization of Medicare, hosted a Republican rally with congressional leaders from the GOP caucus. House Republican Leader Rep. John Boehner (R-OH) endorsed the sentiment of Rep. Joe Wilson’s (R-SC) outburst at the President, saying, “Don’t underestimate the amount of emotion that people are feeling…Americans are frustrated, they’re angry, and, most importantly, they’re scared to death.” Later, when Republican Whip Rep. Eric Cantor (R-VA) began speaking about Obama, he was repeatedly interrupted by howls from the crowd that the President is “a liar.” “Liar, liar pants on fire,” they yelled.