WhiteHouse.gov~Relief for the Middle Class at Tax Time~With April 15th approaching, the President discusses several of the tax breaks for middle class families he has signed into law. Find out more about the Making Work Pay tax credit, breaks for first-time homebuyers, rewards for making your home more energy efficient and more through the Tax Savings Tool at WhiteHouse.gov.

WhiteHouse.gov~Holiday Greetings~~~In this week of Easter, Passover, and faithful celebration, the President offers a holiday greeting and calls on people of all faiths and nonbelievers to remember our shared spirit of humanity.

WhiteHouse.gov~~Two Major Reforms on Health Care & Higher Ed~~The President looks back on a week that saw the passage of two major sets of reforms: one putting Americans in control of their own health care, and one ensuring student loans work for students and families, not as subsidies for bankers and middlemen.

WhiteHouse.gov~The Immediate Benefits of Health Reform~President Obama raises the point that health reform will not only have long-term advantages for the country but will have immediate protections and benefits this year if passed by Congress.

WhiteHouse.gov~~~The Olympic Spirit, the Spirit of Bipartisanship, and Health Reform~The President takes a moment to congratulate our Olympic athletes. Discussing the unity and pride Americans feel in cheering them on, the President relates that sentiment to his own desire for bipartisanship in Washington. He praises the recent bipartisan meeting and talks about moving forward on health reform. 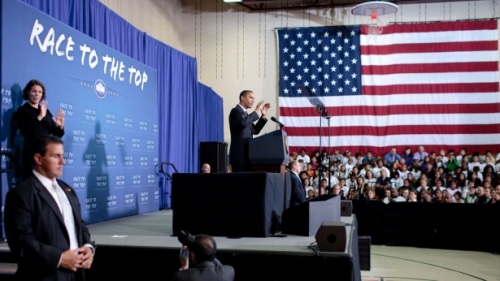 The White House and the Department of Education have announced a new Race to the Top High School Commencement Challenge and are inviting public schools across the country to compete to have President Obama speak at their graduation. At the beginning of the school year, the President encouraged students across the country to take responsibility for their education, study hard and graduate from high school. The Race to the Top High School Commencement challenge encourages schools to show how they are making great strides on personal responsibility, academic excellence and college readiness.

Applications must be completed by students and submitted by a high school’s Principal using the Commencement Challenge Application Form no later than Monday, March 15th at 11:59 pm EST. Each school may submit only one application and high schools must be public to apply. Following the application deadline, six finalists will be selected by the White House and Department of Education. These schools will then be featured on the White House website and the public will have an opportunity to vote for the three schools they think best meet the President’s goal. The President will select a national winner from these three finalists and visit the winning high school to deliver the commencement address to the class of 2010.

The application’s four essay questions focus on demonstrating how the school is helping prepare students to meet the President’s 2020 goal of having the highest proportion of college graduates in the world. Applications will be judged based on the school’s performance and dedication to providing students an excellent education that will prepare them to graduate ready for college and career choices. Each question must be answered in full to qualify and data that substantiates each answer is strongly encouraged.

In addition to the required essay responses, applicants are invited to submit the following optional supplemental materials:

Please use the Commencement Challenge Application Form to apply.

WhiteHouse.gov—Premiums, Profits, and the Need for Health Reform ~ The President points to outrageous premium hikes from health insurance companies, especially those already making massive profits, as further proof of the need for reform. Looking ahead to the coming bipartisan meeting on reform, the President urges members of Congress to come to the table in good faith to address the issue.

WhiteHouse.gov—The President, having just signed the “Pay As You Go” law, discusses the importance of this fundamental rule to getting budget deficits in check. Ensuring that new spending and tax cuts are offset was a important factor in creating the budget surplus of the late 1990’s.

The White House has provided the guest list from First Lady Michelle Obama’s box at President Obama’s 2010 State of the Union address.

The White House has provided the guest list from First Lady Michelle Obama’s box at President Obama’s 2010 State of the Union address.

44-D
Create a free website or blog at WordPress.com.