TVNewser reports that MSNBC is streamlining its daytime schedule and doing away with the themed hours focused on the economy and politics. It’s a back-to-basics approach for the network’s daytime news hours which slipped to fifth place in December, behind FNC, CNN, HLN and CNBC between 9am-4pm.

In a late December shake-up, Ratigan’s morning show was cut in half and moved to a afternoon slot, along with the cancellation of Dr. Nancy Snynderman’s “Dr. Nancy” show.

One year after the inauguration of the first African-American President, MSNBC will present “Hope and Fear in Obama’s America,” January 18, 2010, 10 p.m. ET, an extended discussion surrounding race and post-racial identity in America. Moderated by “Hardball’s” Chris Matthews and featuring syndicated radio host Tom Joyner, live from Texas Southern University, a historically Black university in Houston, Texas. The two-hour special event on Martin Luther King Day will explore some of the most pressing and provocative issues connected to race and race relations in the U.S.

“Hope and Fear in Obama’s America” will discuss the progress we’ve made in the United States and the challenges we continue to face around racial equality, addressing issues ranging from whether there is such a thing as generational colorblindness, to the “burdens of the first,” and whether there are a unique set of expectations and challenges attached to being the first to break a racial barrier. Panelists and guests will be announced at a later date.

MSNBC.com will soon feature additional information on the special and its guests and will also allow viewers to participate in live votes and continue the discussion online.

In a message to his audience of 8 million listeners, Joyner said, “This is an important story because it will give me and you a rare opportunity to participate in a much needed discussion about whether racism is still a relevant topic now that President Obama has been elected.” Joyner added, “It’s a crucial thing when mainstream America wants to know what’s on our minds. Together, we can give provide honest questions and answers about racism in this country. ” 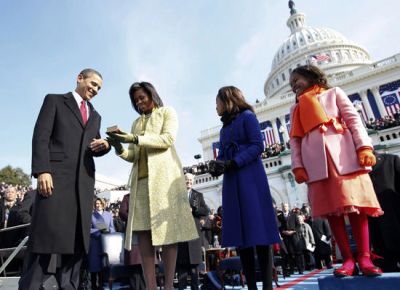 Joyner reassured his listeners, that “of course, the traditional, easy way to tackle these topics is to get the same old people to say the same old things. Not knocking any of the people who have sat on panel after panel after panel to talk about race in America in past years. But it’s almost impossible to get any new perspectives on issues unless we solicit information from varied sources, and from what I can see, at this point, that’s what this MSNBC town hall Meeting will attempt to do. Chris Matthews and I will not talk to a panel of your “usual suspects” about hopes and fears in Obama’s America.”

Last night’s episode of Family Guy mocked MSNBC host Chris Mattews, with the help of… Chris Matthews, who lent his voice to the effort