Students from Across the Country Prepare
for Regional Science Competitions 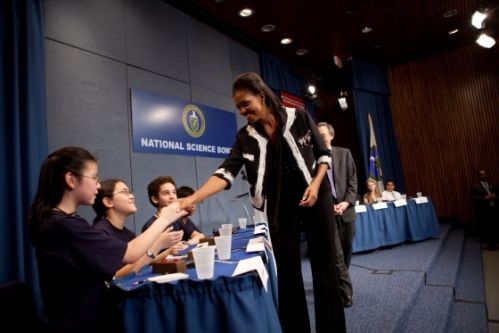 On May 4, 2010 First Lady Michelle Obama will join Energy Secretary Steven Chu for the Department’s 20th Annual National Science Bowl where she will ask the championship round bonus point questions. The First Lady and Secretary Chu will also address the more than 500 high school and middle school students and the 100 teachers and coaches attending the competition. Last November, Mrs. Obama visited the Department and joined Secretary Chu for a practice session for young people competing in the Science Bowl.

In the days prior to the championship, 105 regional high school and middle school championship teams from 42 states, the District of Columbia, Puerto Rico and the U.S. Virgin Islands will participate in round robin and double elimination rounds in which they will be quizzed on math and all science disciplines, including biology, chemistry, earth science, physics and astronomy.

The U.S. Department of Energy (DOE) National Science Bowl® is a nationwide academic competition that tests students’ knowledge in all areas of science. High school and middle school students are quizzed in a fast paced question-and-answer format similar to Jeopardy. Competing teams from diverse backgrounds are comprised of four students, one alternate, and a teacher who serves as an advisor and coach.

A featured event at the National Finals for middle school students, the Hydrogen Fuel Cell Model Car Challenge invites students to design, build, and race model cars. This competition tests the creative engineering skills of many of the brightest math and science students in the nation as they gain hands-on experience in the automotive design process and with hydrogen fuel cell technology.

DOE launched its National Science Bowl competition in 1991 to encourage high school students to excel in science and math and to pursue careers in those fields. “This year we anticipate 6,000 middle school and 15,000 high school students will compete in regional competitions” said Sue Ellen Walbridge, DOE Office of Science program manager for the National Science Bowl®. “From this number, we anticipate 40 middle school and 69 high school teams will participate in the finals held in May.”

The National Science Bowl is the only science competition in the United States sponsored by a federal agency. 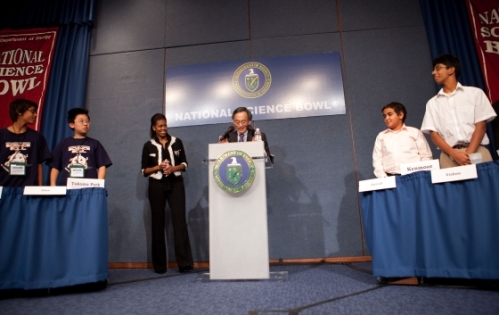 Earth Day 2010 Round Up from Across the Obama Administration

It’s been a busy Earth Day here at the White House and around the Administration.  Yesterday Vice President Biden kicked off the Administration’s Earth Day Celebration by announcing $452 million in Recovery Act funding to support a “Retrofit Ramp-Up.” This program will create thousands of jobs and allow these communities to retrofit hundreds of thousands of homes and businesses while testing out innovative strategies that can be adopted all over the country.  President Obama also issued a Presidential Proclamation on Earth Day calling on Americans to join in the spirit of the first Earth Day forty years ago to take action in their communities to make our planet cleaner and healthier.

This afternoon, Carol Browner, Assistant to the President for Energy and Climate Change, hosted a live chat on WhiteHouse.gov to answer your questions about how the Administration is working to improve the environment and build a clean energy economy that supports the jobs of the future.  This evening, the President hosted an Earth Day reception in the Rose Garden at the White House where he discussed some of the challenges that lie ahead in achieving a clean energy economy:

Over on the Social Innovation and Civic Participation blog, guest blogger and former Peace Corps volunteer Kelly McCormack shares here story about a community solution to an environmental problem in Gautemala.

Finally, President Obama’s cabinet and other senior government officials fanned out across the country as part of the Administration’s 5-day celebration of the 40th anniversary of Earth Day.  From live chats, to announcing major investments in renewable energy, to appearing on the David Letterman show – all-in-all a busy day!