Vice President Joe Biden and Dr. Jill Biden speak to participants in the Wounded Warrior Soldier Ride on the South Lawn of the White House. The ride benefits the Wounded Warrior Projects efforts to provide rehabilitation for wounded soliders and to raise public awareness for the cause.

First Lady Michelle Obama thanks military members and Defense Department civilian employees for their service at the Pentagon, April 9, 2010. (Photo by Cherie Cullen/DOD)

Secretary of Defense Robert Gates welcomed First Lady Michelle Obama to the Pentagon. Mrs. Obama visited the Pentagon to thank military and civilian employees for their service to the nation. 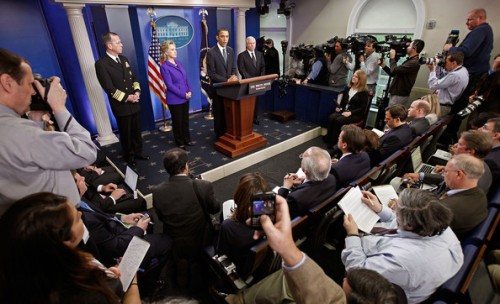 General Petraeus On DADT: “The Time Has Come”

CENTCOM Commander General David Petraeus came to the meeting of the Senate Armed Services Committee preparing to deliver an “eight-minute statement” expressing his personal feelings about the repeal of the military’s “Don’t Ask Don’t Tell” policy. Unfortunately, Senator Carl Levin, who chaired the committee, put the kibosh on those plans, citing time constraints. Instead Petraeus simply told the committee that “the time has come” to give a repeal some due consideration. Petraeus endorsed the ongoing review of the matter that commenced at the direction of Secretary of Defense Robert Gates.

PETRAEUS: I believe the time has come to consider a change to Don’t Ask, Don’t Tell. But I think it should be done in a thoughtful and deliberative matter that should include the conduct of the review that Secretary Gates has directed that would consider the views in the force on the change of policy. It would include an assessment of the likely effects on recruiting, retention, morale and cohesion and would include an identification of what policies might be needed in the event of a change and recommend those polices as well.

Chairman Carl Levin (D-Mich.) did not allow Petraeus to deliver his statement after ranking member Sen. John McCain (R-Ariz.) asked the general whether he believed thorough review was necessary before “Don’t ask, don’t tell” was repealed. Levin’s reason: the committee rule on Tuesday was only a six-minute round of questions and answers for each senator.

Petraeus averred that repealing “Don’t Ask Don’t Tell” is “not a sound-bite issue,” so it’s unfortunate that this is where we’re left today.

Back on February 21 of this year, Petraeus took up the matter with David Gregory on “Meet The Press”:

GREGORY: Do you think soldiers on the ground in the field care one way or the other if their comrade in arms are gay or lesbian?PETRAEUS: I’m not sure that they do. … You heard Gen. Powell who was the chairman when the policy was implemented, had a big hand in that, who said that yes, indeed, the earth has revolved around the sun a number of times since that period 15 months ago. You have heard a variety of anecdotal input. We have experienced certainly in the CIA and the FBI — I know, I served, in fact, in combat with individuals who were gay and who were lesbian in combat situations. Frankly, you know, over time you said, hey, how’s this guy shooting or how is her analysis or what have you?

The Daily Beast/Peter Beinart~Republicans think about terrorism the way Democrats think about poverty. Democrats know their anti-poverty policies don’t always work. But they tell themselves that at least their hearts are in the right place, at least they care about the problem.

In a sense, the Republicans are right: they do worry more about terrorism than Democrats. You can see it in the polls. Democrats–especially liberal Democrats—focus part of their foreign policy anxiety on things like climate change, global pandemics and financial collapse. For many Republicans, by contrast, the terrorists are today’s equivalent of the Nazis and the communists: they’re the only threat that really matters. Everything else is an afterthought.

But as conservatives used to say during the poverty debates of the 1960s and 1970s, intentions and outcomes are not the same thing. Sometimes, ironically enough, not worrying quite so much can produce better results.

Which brings us to Barack Obama’s “war on terror.” Conservatives keep saying that Obama doesn’t really believe we’re at war; that he sees terrorists as mere criminals, not the epic evil-doers that they really are. But here’s the irony: It’s precisely because he doesn’t see the terrorist threat as quite so epic that al Qaeda is falling apart.

In Congress, members are being whipped to ensure that the votes will be there for passage, should the legislation be placed in the bill. At this juncture, aides say, the prospects look good. Meanwhile, a source close to the White House says the president has instructed the Defense Department that he believes the repeal of DADT should be placed in the authorization bill.

However, disagreements could emerge when it comes to crafting the actual legislative language, over which Defense Secretary Robert Gates will wield his influence. And at this juncture, few of the offices working on the issue said they were willing to take passage as a fait accompli.

“People have said publicly and privately that this is a good place for repeal to be placed,” said one Democratic aide on the Hill. “It would be reasonable to expect that repeal might be in this year’s defense authorization… But we aren’t assuming anything yet.” 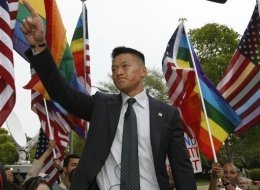 Lt. Dan Choi is an Iraq war veteran, Arabic speaker and West Point graduate who is fighting his dismissal from the Army National Guard for violating the military's DADT policy

If repeal of DADT is added to the defense authorization bill, critics of the program will view it as a long-overdue move. The initial law, in which members of the military weren’t asked about their sexuality nor allowed to serve openly, was passed as part of the defense authorization for FY1994. Since then, a delicate balance — which no particular side of the debate appreciated — has been the law of the land. As a result, thousands of military personnel have hidden their sexuality from their superiors and even more have been dismissed for making their sexuality public.

The Missing Link From Killeen to Kabul by Frank Rich

New York Times/Frank Rich—The dead at Fort Hood had not even been laid to rest when their massacre became yet another political battle cry for the self-proclaimed patriots of the American right.

Their verdict was unambiguous: Maj. Nidal Malik Hasan, an American-born psychiatrist of Palestinian parentage who sent e-mail to a radical imam, was a terrorist. And he did not act alone. His co-conspirators included our military brass, the Defense Department, the F.B.I., the Walter Reed Army Medical Center, the Joint Terrorism Task Force and, of course, the liberal media and the Obama administration. All these institutions had failed to heed the warning signs raised by Hasan’s behavior and activities because they are blinded by political correctness toward Muslims, too eager to portray criminals as sympathetic victims of social injustice, and too cowardly to call out evil when it strikes 42 innocents in cold blood.

The invective aimed at these heinous P.C. pantywaists nearly matched that aimed at Hasan. Joe Lieberman announced hearings to investigate the Army for its dereliction of duty on homeland security. Peter Hoekstra, the ranking Republican on the House Intelligence Committee, vowed to unmask cover-ups in the White House and at the C.I.A. The Weekly Standard blog published a broadside damning the F.B.I. for neglecting the “broader terrorist plot” of which Hasan was only one of the connected dots. Jerome Corsi, the major-domo of the successful Swift-boating of John Kerry, unearthed what he said was proof that Hasan had advised President Obama during the transition.

William Bennett excoriated soft military leaders like Gen. George Casey Jr., the Army chief of staff, who had stood up for diversity and fretted openly about a backlash against Muslim soldiers in his ranks. “Blind diversity” that embraces Islam “equals death,” wrote Michelle Malkin. “There is a powerful case to be made that Islamic extremism is not some fringe phenomenon but part of the mainstream of Islamic life around the world,” wrote the columnist Jonah Goldberg. Islam is “not a religion,” declared the irrepressible Pat Robertson, but “a violent political system bent on the overthrow of the governments of the world.”