A Battle that Takes Place Every Day

Today I had the pleasure of co-hosting a conference call with Kathleen Sebelius, the Secretary of Health and Human Services, to highlight Breast Cancer Awareness Month and to emphasize the importance of early detection and regular screenings.

We were joined on the call by breast cancer survivors, advocates, and various women’s group from across the country. I was especially honored to have two breast cancer survivors, Joy Veronica Foster and Lorene Nelson, join me in my office so they could share their personal stories on the call. Listening to these women, and knowing we were joined by many others on the line was truly inspirational and heartwarming.

October is Breast Cancer Awareness Month, but the battle against breast cancer takes place every day, every hour, every 69 seconds as someone’s mother, sister, daughter, and friend loses her life to breast cancer. We still have a lot of work ahead of us, but today’s conference call gave me hope. With the ongoing commitment of the Obama-Biden Administration to ensure that affordable and accessible preventive care is a reality, and the many breast cancer advocates, and survivors like Lorene and Joy who are changing lives with their work every day – I know we are moving closer to a breast cancer-free world.

When Pulitzer Prize winner Geraldine Brooks was diagnosed with cancer overseas, she didn’t hightail it back home, to “the best health care in the world”—she stayed in Australia, home to a humane, rational system.

In 2004, I’d just finished a novel and by way of celebration had taken my family for an extended visit to Australia, where I was born and raised.

I didn’t expect that trip to save my life. But I’m convinced it did, because of Australia’s “socialized” medicine.

I retreat to my garret when I write a novel, especially toward the end. I stop going anyplace, wear sweat pants all day, neglect personal grooming. Back in the Sydney neighborhood where I’d lived for many years, I was re-entering the civilized world, and was on the way to a salon for an overdue haircut when I passed the BreastScreen van, parked in the main street.

This mobile service offers free mammograms, no appointment necessary. It wasn’t until I saw that van that I realized a mammogram was one of the things I’d forgotten to do. I was a year overdue, according to the guidelines for women my age, so I stepped into the van, got squished and zapped by a pleasantly efficient technician, who told me a radiologists’ report would be mailed out in a week or so. 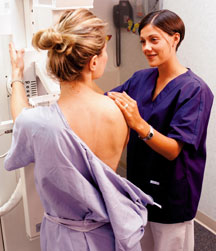 Two weeks later, I was in a Sydney hospital, discussing treatment options for my invasive stage II cancer. According to testimony by Senator John Barrasso (R-WY) at last Thursday’s health-care summit, I should have been heading for the airport at that point. Like his unnamed Canadian state premier with the heart condition, I should have been hightailing it to the U.S., to avail myself of “the best health care in the world.”

No thanks, Senator. I elected to stay in Australia. We had ample U.S. insurance; cost wasn’t an issue. I simply wanted to remain in a humane, rational system where doctors treat a person as a patient, not a potential plaintiff, and where the procedures ordered for me were the ones shown by hard science to produce the best outcome for the most people.