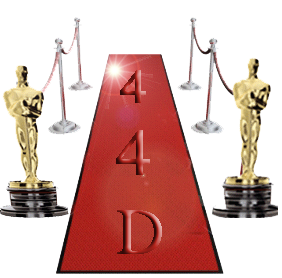 Great news! 44-D has been given official press credentials by the Academy of Motion Picture Arts and Sciences®. We’ll be bringing you up to date information on the 82nd Academy Awards® nominees, films, and ceremony activities. This year’s Oscars® should be very interesting due to the fact that they are expanding the Best Picture category to include ten films instead of five.

Join us each day for news at the 44-D’s virtual red carpet to the Oscars®! We will be LIVE BLOGGING the Oscars® on Sunday, March 7th!

Steve Martin and Alec Baldwin will serve as co-hosts of the 82nd Academy Awards. This will be Martin’s third time hosting the Oscars® and Baldwin’s first.

The Academy of Motion Picture Arts and Sciences is the world’s preeminent movie-related organization, with a membership of more than 6,000 of the most accomplished men and women working in cinema. In addition to the annual Academy Awards – in which the members vote to select the nominees and winners – the Academy presents a diverse year-round slate of public programs, exhibitions and events; provides financial support to a wide range of other movie-related organizations and endeavors; acts as a neutral advocate in the advancement of motion picture technology; and, through its Margaret Herrick Library and Academy Film Archive, collects, preserves, restores and provides access to movies and items related to their history. Through these and other activities the Academy serves students, historians, the entertainment industry and people everywhere who love movies.

Academy President Sid Ganis announces that the 82nd Academy Awards®, will have 10 feature films vying in the Best Picture category.