Trick-or-Treat with the President and First Lady

Carved pumpkins depicting President Barack Obama, Abraham Lincoln, and the White House sit on a stone wall next door to where the President was attending a dinner reception in Providence, Rhode Island, Oct. 25, 2010. (Official White House Photo by Pete Souza)

First Lady Michelle Obama and U.S. President Barack Obama greet trick or treaters and their parents at the White House October 31, 2010 in Washington, DC. The Obama’s greeted children and military families at the North Portico to celebrate Halloween and to trick or treat across the North Lawn. 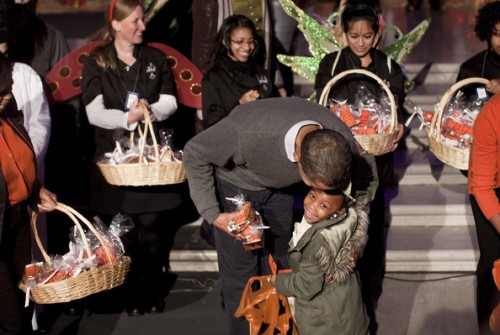 President Barack Obama hugs a trick or treater at the White House October 31, 2010 in Washington, DC. The Obama's greeted children and military families at the North Portico to celebrate Halloween and to trick or treat across the North Lawn. (Photo by Brendan Smialowski/Getty Images North America)

An American Tradition: UNICEF’s Trick or Treat is Young at 60

When I was growing up, I carried two things with me on Halloween: a bag for candy and my UNICEF box. This was true from the moment of my very first Trick-or-Treat. In the late 1960s and ’70s, Washington, DC felt a world away from the battle-scarred towns of post-World War II Europe, and from the villages of the developing world that were suffering from food insecurity and infectious disease.

But thanks to the U.S. Fund for UNICEF’s “Trick-or-Treat” campaign and my bright orange box full of jangling coins, I knew that I had the power to make a difference. I knew I could help give other young kids access to safe water if they were thirsty, medicines if they were in danger of getting sick, and textbooks even if they lacked access to a good school. Still today, the backs of UNICEF’s orange boxes translate kids’ efforts into real outcomes: seven cents gets 50 kids safe water for a day. Nineteen dollars gets three mosquito nets and some much-needed protection against malaria. More than $160 million has been collected for UNICEF on Halloween.

The U.S. Fund’s Halloween campaign was my first exposure to the United Nations. Ever since my childhood, I’ve been passionate about UNICEF and its efforts. I am proud today to release an official statement congratulating the U.S. Fund for UNICEF on the 60th anniversary of its Halloween collections. And I’m proud to add my voice to a chorus of support that has included Presidents Kennedy and Johnson, First Ladies Ford, Reagan and Bush, Mighty Mouse, the New Kids on the Block, and Spiderman. I wish UNICEF the best with its Halloween collections this year, and I wish all children, including my own, a safe and happy Halloween.

Ambassador Susan Rice is the U.S. Permanent Representative to the United Nations