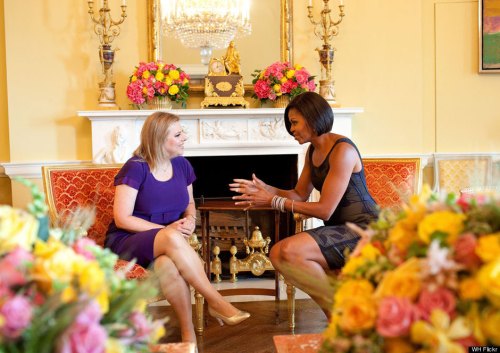 The tête-à-tête was scheduled to last a half an hour but, like their husband’s meeting, it ran longer – for an entire hour.

During the meeting, Michelle Obama commended Sara Netanyahu on the work she does as a psychologist in the service of the public.

The first lady also knew of Avner Netanyahu’s achievements in the National Bible Quiz, and even where Sara’s older son, Yair, serves in the army.

The two ladies also discussed the Soccer World Cup, and Michelle said her daughters both play soccer. She added that the World Cup was helpful in teaching her children, and Americans as a whole, about the countries of the world.

At this stage the presidential dog wandered in and both of the ladies patted him.

When the Netanyahu couple arrived at the presidential guest house in Washington, a bouquet of flowers awaited them together with a card from the first lady, in which she expressed hope that the relations between the two countries would grow even closer.

Though the president and the prime minister were meeting for the fifth time, the rendezvous was a first for the two ladies.