HP ~ Conservative talk show hosts and columnists have ridiculed an 11-year-old Washington state boy’s account of his mother’s death as a “sob story” exploited by the White House and congressional Democrats like a “kiddie shield” to defend their health care legislation. 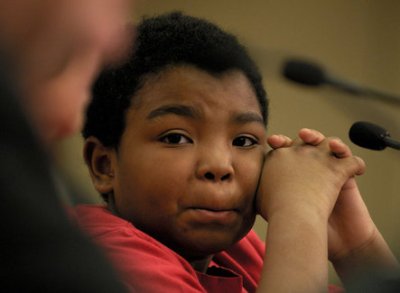 “My mother always taught me they can have their own opinion but that doesn’t mean they are right,” Owens, who lives in Seattle, said in an interview.

Owens’ grandmother, Gina, who watched her daughter die, isn’t quite so generous.

“These are adults, and he is an 11-year-old boy who lost his mother,” Gina Owens said. “They should be ashamed.”

Sen. Patty Murray, D-Wash., told Marcelas Owens’ story to President Barack Obama and Vice President Joe Biden at the White House health care summit last month. Murray also has spoken about it on the Senate floor. Last week, Owens was in the nation’s capital to speak at a health care rally and to meet with Senate Democratic leadership.

Limbaugh, Beck and Malkin are skeptical about the story, saying there were other forms of medical help available after Owens’ mother, Tifanny, lost her health insurance. They lambasted Democrats for using the story.

“Now this is unseemly, exploitative, an 11-year-old boy being forced to tell his story all over just to benefit the Democrat Party and Barack Obama,” Limbaugh said on March 12, according to a transcript his show. “And, I would say this to Marcelas Owens: ‘Well, your mom would still have died, because Obamacare doesn’t kick in until 2014.'”

Beck, according to a transcript of his March 15 show, pointed out that Owens’ recent trip to Washington was paid for by Healthcare of America, a group that has been lobbying for a health care overhaul.

“That’s the George Soros-funded Obama-approved group fighting for health care,” Beck said. “Since all of the groups are so concerned and involved now, may I ask where were you when Marcelas’ mother was vomiting blood?”

Beck, who’s from Mount Vernon, Wash., said there were plenty of programs in Washington state that could have helped Tifanny Owens.

Malkin dismissed Marcelas Owens as “one of Obama’s youngest lobbyists” who has been “goaded by a left-wing activist grandmother,” promoted by Murray and has become a regular on the “pro-Obamacare circuit.”

Malkin also suggested there were other programs that could have helped Tifanny Owens, adding, “It’s not clear that additional doctors’ visits in the subsequent months would have prevented her death.”

Tifanny Owens died in June 2007 of pulmonary hypertension, which is described as high blood pressure in the arteries of the lungs that can lead to heart failure. The disease is considered rare. While there’s no cure, it can be treated.

The treatments can cost as much as $100,000 a year and must be “consistent and constant,” said Katie Kroner, the director of advocacy and awareness for the Pulmonary Hypertension Association.

“It’s extremely important to have health coverage,” she said.

Owens was an assistant manager at a fast food restaurant when she became sick in September 2006. As she became sicker, she missed work and was eventually fired, leaving her without health insurance. She was treated twice in an emergency room and died at age 27 after a week of unconsciousness. Gina Owens has custody of Marcelas and his two younger sisters.

Gina Owens said her daughter didn’t qualify for Medicaid. State officials said that without knowing the details, it was impossible to speculate on whether Tifanny Owens would have qualified.

Tifanny Owens might have been eligible for Washington state’s basic health care plan, which is aimed at the working poor. The plan has had a long waiting list for some time, said Sharon Michael of the Washington state Health Care Authority.

Limbaugh has gone after young people before. In 2007, he told listeners that Democrats were exploiting an 18-year-old Yup’ik Eskimo and that her congressional testimony of global warming made him want to “puke.”

Murray said she was appalled at how vicious the health care debate has become.

“The mom in me is getting really mad,” she said. “You don’t tear apart an 11-year-old because his mom died.”

Marcelas Owens said he’ll never know if his mother might have lived if she had health insurance.

“At least if she had it she would’ve had a fighting chance,” he said.

President Obama: “I Still Believe We Can Do What’s Right”

President Barack Obama arrives to speak on health care reform at George Mason University March 19, 2010 in Fairfax, Virginia. Obama is making a last minute appeal for support of his proposed health care legislation as the U.S. House of Representatives is expected to vote on the legislation as early as Sunday afternoon March 21. (Photo by Win McNamee/Getty Images North America)

This morning, speaking before thousands at the Patriot Center in Virginia, the President was perhaps even more passionate about finishing the job on health reform than any time in this year-long debate. It’s probably best to let him speak for himself, so read the full transcript for yourself or a few excerpts below:

President Obama: A few miles from here, Congress is in the final stages of a fateful debate about the future of health insurance in America. (Applause.) It’s a debate that’s raged not just for the past year but for the past century. One thing when you’re in the White House, you’ve got a lot of history books around you. (Laughter.) And so I’ve been reading up on the history here. Teddy Roosevelt, Republican, was the first to advocate that everybody get health care in this country. (Applause.) Every decade since, we’ve had Presidents, Republicans and Democrats, from Harry Truman to Richard Nixon to JFK to Lyndon Johnson to — every single President has said we need to fix this system. It’s a debate that’s not only about the cost of health care, not just about what we’re doing about folks who aren’t getting a fair shake from their insurance companies. It’s a debate about the character of our country -– (applause) — about whether we can still meet the challenges of our time; whether we still have the guts and the courage to give every citizen, not just some, the chance to reach their dreams. (Applause.)

Placing the coming vote in the context of history:

President Obama: In just a few days, a century-long struggle will culminate in an historic vote. And when we have faced such decisions in our past, this nation has chosen time and again to extend its promise to more of its people.

When the naysayers argued that Social Security would lead to socialism, the men and women of Congress stood fast, and created a program that has lifted millions of poverty.
When the cynics warned that Medicare would lead to a government takeover of our entire health care system, and it didn’t have much support in the polls, Democrats and Republicans refused to back down, and made sure that all of us could enter our golden years with some basic peace of mind.

Generations ago, those who came before made the decision that our seniors and our poor should not be forced to go without health care just because they couldn’t afford it. Today, it falls to this generation to decide whether we will make the same promise to middle-class families, and small businesses, and young Americans like yourselves who are just starting out.

Obamas to Hold State Dinner for Mexico in May

Press secretary Robert Gibbs announced that President Obama and First Lady Michelle will host a state dinner on May 19 for Mexican President Felipe Calderon and First Lady Margarita Zavala de Calderon during a two-day state visit. It will be the Obamas’ second state dinner – and the first put on by Julianna Smoot, who starts her new job as social secretary on Monday. Gibbs announced the upcoming event at the Thursday briefing–held outside on a warm day in the Rose Garden.

“The dinner will take place in the context of an official visit by President Calderon, during which the president will have an opportunity to discuss a wide range of issues with President Calderon, including economic competitiveness, our growing security cooperation, clean-energy opportunities, immigration and other key issues.”

Photo of the Day: Health Care Reform Rally in Ohio

Tagged as day, Of, photo, the