In shocking video taken by a Columbus Dispatch reporter Doral Chenowith yesterday, Tea Party protestors mock a seated counter-protestor with a sign indicating he has Parkinson’s disease. They then proceed to hurl wadded up bills at him shouting, “I’ll decide when to give you money!”

“This has gone way too far,” said Brian Rothenberg, Executive Director of ProgressOhio.

“All of these candidates that pander to the Tea Party, whether it is Steve Stivers, John Kasich or national leaders like John Boehner, need to disavow the behavior these bullies exhibited in the video.”
Vodpod videos no longer available.

A member of the North Texas Mean Green wears a mask with the likeness of President Barack Obama as they perform against the Kansas State Wildcats during the first round of the 2010 NCAA men's basketball tournament at Ford Center on March 18, 2010 in Oklahoma City, Oklahoma. (Photo by Ronald Martinez/Getty Images North America) 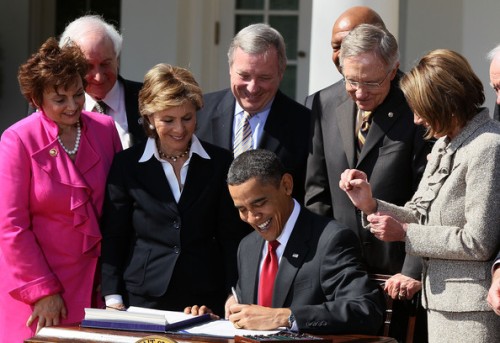 Surrounded by members of Congress, President Barack Obama signs the Hire Act during a ceremony in the Rose Garden at the White House on March 18, 2010 in Washington, DC. The HIRE Act will offer a payroll tax break for businesses that hire unemployed workers and will offer businesses an income tax credit of $1,000 for retaining these employees. (Photo by Mark Wilson/Getty Images North America)

“While this jobs bill is absolutely necessary, it is by no means enough,” Obama said during a sunny Rose Garden bill signing ceremony. “There is a lot more we need to do to spur hiring in the private sector and bring about a full economic recovery; from helping creditworthy small businesses get the loans they need to expand, to offering incentives to make homes and businesses more energy-efficient, to investing in infrastructure so we can put Americans to work doing the work America needs done.” 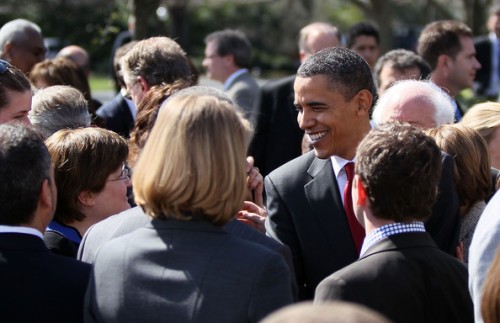 Obama also urged lawmakers to consider a new estimate from the Congressional Budget Office that the health-care legislation will reduce the federal deficit by $130 billion in the first decade and $1.2 trillion in the next. He said it represented the “most significant effort to reduce the deficit” since the Balanced Budget Act.

“I urge every member of Congress to consider this as they prepare for their very important vote this weekend,” Obama said.

“I am your worst-case scenario…  I voted my conscience, and it cost me. And I’d do it all again.”

Dear wavering House Democrats,
I feel your pain. Eighteen years ago, I was elected on the coattails of a popular young Democratic president who promised a post-partisan Washington. A year later, with partisan gridlock capturing the Capitol, there was a razor-thin vote on the House floor over legislation that Democrats said would remake the country and Republicans promised would bankrupt it.

I was pressed on all sides: by constituents opposed, my president needing a victory and Republicans promising my demise. I was in the country’s most Republican district represented by a Democrat. I had repeatedly said, “I will not be a ‘read my lips’ candidate,” when asked if I would promise not to raise taxes, I voted my conscience, and it cost me…

… Simply put, you could be Margolies-Mezvinskied whether you vote with or against President Obama. You will be assailed no matter how you vote this week. And this job isn’t supposed to be easy. So cast the vote that you won’t regret in 18 years.

Marjorie Margolies-Mezvinski is a former member of Congress and co-founder of, Women’s Campaign International.

From: Ryan Grimm HP
Comprehensive health care reform will cost the federal government $940 billion over a ten-year period, but will increase revenue and cut other costs by a greater amount, leading to a reduction of $130 billion in the federal deficit over the same period, according to an analysis by the Congressional Budget Office, a Democratic source tells HuffPost. It will cut the deficit by $1.2 trillion over the next ten years.

The source said it also extends Medicare’s solvency by at least 9 years and reduces the rate of its growth by 1.4 percent, while closing the doughnut hole for seniors, meaning there will no longer be a gap in coverage of medication. The CBO also estimated it would extend coverage to 32 million additional people.

The CBO score is the last piece House Speaker Nancy Pelosi (D-Calif.) was waiting on before putting the puzzle together on the House floor. A contingent of Blue Dogs has been holding out support, insisting that the bill be fully paid for and not increase the deficit. The numbers give a major boost to Pelosi and her leadership team, which can now begin the whip count in earnest and can specifically point to the cost savings.

WASHINGTON (AP) – House Democrats are on track for a Sunday vote on sweeping health care legislation that will expand coverage to millions of uninsured while also reducing the federal deficit, leaders said Thursday. The bill delivers on President Barack Obama’s top domestic priority by providing coverage to more than 30 million people now uninsured at a 10-year cost of $940 billion. It does so through a combination of tax credits for middle class households and an expansion of the Medicaid program for low income people.

House Dems on track for vote on $940B health bill