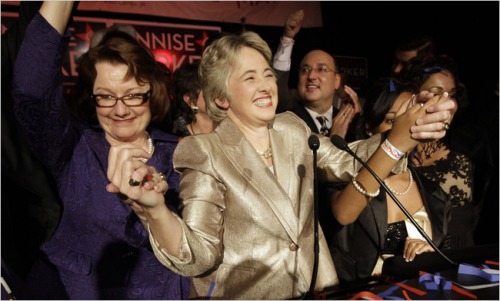 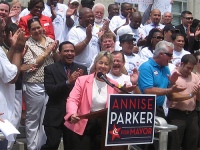 Annise Parker (born May 17, 1956, Houston, Texas) is a Houston-area politician, the Mayor-elect of Houston, and the current Controller of the City of Houston, which is a position second only to that of Mayor. Previously, she served as an at-large member of the Houston City Council since 1997. Parker was victorious in her run for controller in 2003. She ran unopposed in 2005 and 2007; as of December 2009, she is into her final term.

Parker placed first in the November 2009 mayoral election, but failed to capture a majority of the vote. She decisively defeated attorney Gene Locke, the second-place candidate, in the December runoff. Upon taking office as mayor in January, Parker will be the highest-ranking municipal official in the LGBT community of the United States. (from Wikipedia)

Annise Parker sworn in as Mayor of the city of Houston – January 4, 2010. Houston becomes the largest American city with an openly-Gay Mayor

more about "Annise Parker sworn in as Mayor of th…", posted with vodpod