The History of Kwanzaa 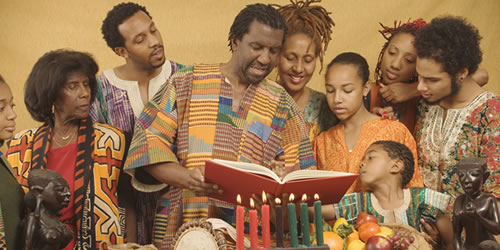 Dr. Maulana Karenga, professor and chairman of Black Studies at California State University, Long Beach, created Kwanzaa in 1966. After the Watts riots in Los Angeles, Dr. Karenga searched for ways to bring African-Americans together as a community. He founded US, a cultural organization, and started to research African “first fruit” (harvest) celebrations. Karenga combined aspects of several different harvest celebrations, such as those of the Ashanti and those of the Zulu, to form the basis of Kwanzaa.

The name Kwanzaa is derived from the phrase “matunda ya kwanza” which means “first fruits” in Swahili. Each family celebrates Kwanzaa in its own way, but celebrations often include songs and dances, African drums, storytelling, poetry reading, and a large traditional meal. On each of the seven nights, the family gathers and a child lights one of the candles on the Kinara (candleholder), then one of the seven principles is discussed. The principles, called the Nguzo Saba (seven principles in Swahili) are values of African culture which contribute to building and reinforcing community among African-Americans. Kwanzaa also has seven basic symbols which represent values and concepts reflective of African culture. Click here for the symbols. An African feast, called a Karamu, is held on December 31.

The candle-lighting ceremony each evening provides the opportunity to gather and discuss the meaning of Kwanzaa. The first night, the black candle in the center is lit (and the principle of umoja/unity is discussed). One candle is lit each evening and the appropriate principle is discussed. 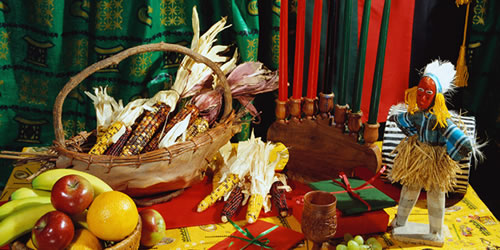 The seven principles, or Nguzo Saba are a set of ideals created by Dr. Maulana Karenga. Each day of Kwanzaa emphasizes a different principle.

Unity Umoja (oo–MO–jah)
To strive for and maintain unity in the family, community, nation, and race.

Collective Work and Responsibility Ujima (oo–GEE–mah)
To build and maintain our community together and make our brother’s and sister’s problems our problems and to solve them together.

Cooperative Economics Ujamaa (oo–JAH–mah)
To build and maintain our own stores, shops, and other businesses and to profit from them together.

Purpose Nia (nee–YAH)
To make our collective vocation the building and developing of our community in order to restore our people to their traditional greatness.

Creativity Kuumba (koo–OOM–bah)
To do always as much as we can, in the way we can, in order to leave our community more beautiful and beneficial than we inherited it.

Faith Imani (ee–MAH–nee)
To believe with all our heart in our people, our parents, our teachers, our leaders, and the righteousness and victory of our struggle.

Mazao, the crops (fruits, nuts, and vegetables), symbolizes work and the basis of the holiday. It represents the historical foundation for Kwanzaa, the gathering of the people that is patterned after African harvest festivals in which joy, sharing, unity, and thanksgiving are the fruits of collective planning and work. Since the family is the basic social and economic center of every civilization, the celebration bonded family members, reaffirming their commitment and responsibility to each other. In Africa the family may have included several generations of two or more nuclear families, as well as distant relatives. Ancient Africans didn’t care how large the family was, but there was only one leader – the oldest male of the strongest group. For this reason, an entire village may have been composed of one family. The family was a limb of a tribe that shared common customs, cultural traditions, and political unity and were supposedly descended from common ancestors. The tribe lived by traditions that provided continuity and identity. Tribal laws often determined the value system, laws, and customs encompassing birth, adolescence, marriage, parenthood, maturity, and death. Through personal sacrifice and hard work, the farmers sowed seeds that brought forth new plant life to feed the people and other animals of the earth. To demonstrate their mazao, celebrants of Kwanzaa place nuts, fruit, and vegetables, representing work, on the mkeka. 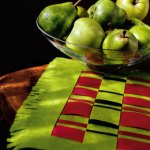 The mkeka, made from straw or cloth, comes directly from Africa and expresses history, culture, and tradition. It symbolizes the historical and traditional foundation for us to stand on and build our lives because today stands on our yesterdays, just as the other symbols stand on the mkeka. In 1965, James Baldwin wrote: “For history is not merely something to be read. And it does not refer merely, or even principally, to the past. On the contrary, the great force of history comes from the facts that we carry it within us, are consciously controlled by it in many ways, and history is literally present in all that we do. It could scarcely be otherwise, since it is to history that we owe our frames of reference, our identities, and our aspirations.” During Kwanzaa, we study, recall, and reflect on our history and the role we are to play as a legacy to the future. Ancient societies made mats from straw, the dried seams of grains, sowed and reaped collectively. The weavers took the stalks and created household baskets and mats. Today, we buy mkeka that are made from Kente cloth, African mud cloth, and other textiles from various areas of the African continent. The mishumaa saba, the vibunzi, the mazao, the zawadi, the kikombe cha umoja, and the kinara are placed directly on the mkeka. 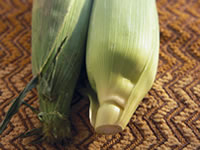 Ears of Corn The stalk of corn represents fertility and symbolizes that through the reproduction of children, the future hopes of the family are brought to life. One ear is called vibunzi, and two or more ears are called mihindi. Each ear symbolizes a child in the family, and thus one ear is placed on the mkeka for each child in the family. If there are no children in the home, two ears are still set on the mkeka because each person is responsible for the children of the community. During Kwanzaa, we take the love and nurturance that was heaped on us as children and selflessly return it to all children, especially the helpless, homeless, loveless ones in our community. Thus, the Nigerian proverb “It takes a whole village to raise a child” is realized in this symbol (vibunzi), since raising a child in Africa was a community affair, involving the tribal village, as well as the family. Good habits of respect for self and others, discipline, positive thinking, expectations, compassion, empathy, charity, and self-direction are learned in childhood from parents, from peers, and from experiences. Children are essential to Kwanzaa, for they are the future, the seed bearers that will carry cultural values and practices into the next generation. For this reason, children were cared for communally and individually within a tribal village. The biological family was ultimately responsible for raising its own children, but every person in the village was responsible for the safety and welfare of all the children. 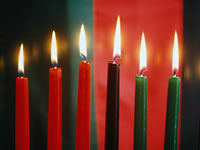 Candles are ceremonial objects with two primary purposes: to re-create symbolically the sun’s power and to provide light. The celebration of fire through candle burning is not limited to one particular group or country; it occurs everywhere. Mishumaa saba are the seven candles: three red, three green, and one black. The back candle symbolizes Umoja (unity), the basis of success, and is lit on December 26. The three green candles, representing Nia, Ujima, and Imani, are placed to the right of the Umoja candle, while the three red candles, representing Kujichagulia, Ujamaa, and Kuumba, are placed to the left of it. During Kwanzaa, on candle, representing one principle, is lit each day. Then the other candles are relit to give off more light and vision. The number of candles burning also indicate the principle that is being celebrated. The illuminating fire of the candles is a basic element of the universe, and every celebration and festival includes fire in some form. Fire’s mystique, like the sun, is irresistible and can destroy or create with its mesmerizing, frightening, mystifying power.

Mishumaa saba’s symbolic colors are from the red, black, and green flag (bendara) created by Marcus Garvey. The colors also represent African gods. Red is the color of Shango, the Yoruba god of fire, thunder, and lightning, who lives in the clouds and sends down his thunderbolt whenever he is angry or offended. It also represents the struggle for self-determination and freedom by people of color. Black is the people, the earth, the source of life, representing hope, creativity, and faith and denoting messages and the opening and closing of doors. Green represents the earth that sustains our lives and provides hope, divination, employment, and the fruits of the harvest

The kinara is the center of the Kwanzaa setting and represents the original stalk from which we came: our ancestry. The kinara can be shape – straight lines, semicircles, or spirals – as long as the seven candles are separate and distinct, like a candelabra. Kinaras are made from all kinds of materials, and many celebrants create their own from fallen branches, wood, or other natural materials. The kinara symbolizes the ancestors, who were once earth bound; understand the problems of human life; and are willing to protect their progeny from danger, evil, and mistakes. In African festivals the ancestors are remembered and honored. The mishumaa saba are placed in the kinara. 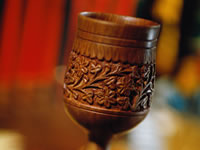 The kikombe cha umoja is a special cup that is used to perform the libation (tambiko) ritual during the Karamu feast on the sixth day of Kwanzaa. In many African societies libation are poured for the living dead whose souls stay with the earth they tilled. The Ibo of Nigeria believe that to drink the last portion of a libation is to invite the wrath of the spirits and the ancestors; consequently, the last part of the libation belongs to the ancestors. During the Karamu feast, the kikombe cha umoja is passed to family member and guests, who drink from it to promote unity. Then, the eldest person present pours the libation (tambiko), usually water, juice, or wine, in the direction of the four winds – north, south, east, and west – to honor the ancestors. The eldest asks the gods and ancestors to share in the festivities and, in return, to bless all the people who are not at the gathering. After asking for this blessing, the elder pours the libation on the ground and the group says “Amen.” Large Kwanzaa gatherings may operate just as communion services in most churches, for which it is common for celebrants to have individual cups and to drink the libation together as a sign of unity. Several families may have a cup that is specifically for the ancestors, and everyone else has his or her own. The last few ounces of the libation are poured into the cup of the host or hostess, who sips it and then hands it to the oldest person in the group, who asks for the blessing.

When we celebrate Imani on the seventh day of Kwanzaa, we give meaningful zawadi (gifts) to encourage growth, self-determination, achievement, and success. We exchange the gifts with members of our immediate family, especially the children, to promote or reward accomplishments and commitments kept, as well as with our guests. Handmade gifts are encouraged to promote self-determination, purpose, and creativity and to avoid the chaos of shopping and conspicuous consumption during the December holiday season. A family may spend the year making kinaras or may create cards, dolls, or mkekas to give to their guests. Accepting a gift implies a moral obligation to fulfill the promise of the gift; it obliges the recipient to follow the training of the host. The gift cements social relationships, allowing the receiver to share the duties and the rights of a family member. Accepting a gift makes the receiver part of the family and promotes Umoja.

Excerpted from the book: The Complete Kwanzaa Celebrating Our Cultural Harvest. Copyright 1995 by Dorothy Winbush Riley. Reprinted with permission from HarperPerennial, a division of HarperCollins Publishers, Inc. All rights reserved. 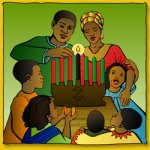 Back to Happy Holidays Main Page