“OK, I groaned a little when I got the press material for “JFK: 3 Shots That Changed America“. I thought I had seen every scrap of footage related to the Kennedy assassination far too many times already.

Boy was I wrong. “JFK” presents a remarkable parade of clips of home movies, raw news footage, police dispatches and local Dallas coverage — much of it never before aired. And it does so in chronological order and entirely without narration.

The lack of voiceover gives the stream of footage incredible power. Nobody’s telling you what happened or how you’re supposed to interpret it, and this frees the viewer to re-experience a moment of local chaos, national trauma and a time when the fledgling medium of TV news was just figuring itself out.

While presented in a minute-by-minute fashion, the clips arrive weird, raw and jumbled. The documentary often seems like a video version of an archaeological dig, with the editors trying to make sense of so many broken shards of pottery.

A stripper from Jack Ruby’s Carousel club appears on a talk show just hours after the arrest of the assassin’s assassin. We hear a clip from a radio broadcast of a Philharmonic orchestra as the conductor announces the president’s murder to a thunderous gasp from the audience, before leading the musicians in an impromptu performance of a Beethoven funeral march. A friend of Jack Ruby suggests that he saw Lee Harvey Oswald in his nightclub just a week before the assassination. Local correspondents insist on calling the alleged shooter Lee Harold Oswald.

We also learn from a number of clips that, contrary to TV legend, Walter Cronkite did not break the news of the president’s death, but that it dribbled out from various sources, with the tentative nature of a horrible rumor nobody wanted to believe. 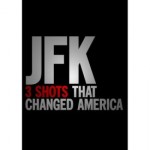 Just hours before his death, John F. Kennedy appeared before a crowd in Fort Worth, Texas in what would be his final speech, delivering one last homage to American freedom.

This poignant moment is part of a vast historical record of sights and sounds captured on camera during those catastrophic days. The Zapruder film is only the beginning; much more archival material of the events surrounding the assassination exists.

This two-part special uses unique, rarely seen and heard footage to document the Kennedy assassination and the nearly 50 years of speculation and controversy that changed America. This material comes from a range of sources including eyewitness home movies, Dallas police dispatch radio recordings, and raw news footage. Part 1 is a shocking, unflinching look at the assassination of the President and the days that followed.

The second part of the special documenting the JFK assassination examines the aftermath, and the enduring controversies that emerged as succeeding generations of Americans struggled to comprehend the sudden murder of an unforgettable leader.

There are some clips available on youtube to view scenes from Part One.