Why I’m Optimistic About Maine by Paul Hogarth 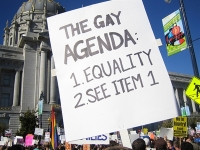 Beyond Chron/Paul Hogarth—I’m back home in San Francisco, after spending 10 days on the ground in Maine with the “No on 1” campaign. After my time there, I truly believe that – with our help – Maine will become the first state in the nation to successfully defend marriage equality at the ballot box, providing a roadmap for California to repeal Proposition 8. Maine activists have been working hard for five years to pass gay marriage, but events in the last few days now point to what should be an historic victory on November 3rd. With only 19 days left, what I’m seeing from the “Yes on 1” campaign reminds me of where “No on 8” was at this point last year – outgunned by the opposition, unable to control the message and at a loss about what to do. If Question 1 passes, it will be our fault for not having done more. But if Question 1 fails, those of us who get involved will have made history – which is why I hope to go back for the last four days. Here are the reasons for my optimism …

One reason why I got involved in this effort was that “No on 1” said they only needed $3 million dollars for the entire campaign – a pittance compared with California efforts. “We’re a cheap date,” said campaign manager Jesse Connolly at this year’s Netroots Nation Convention. New fundraising totals that came out this week show that “No on 1” has already raised $2.7 million (with most of the money coming from Maine residents) – and bloggers are planning a big fundraising push for today that should keep them on track with their goal.

The bigger news, however, is that “Yes on 1” reported only raising $1.1 million – with a campaign debt of $400,000 (our side has no debt.) This provoked their spokesman Marc Mutty (who is on loan from the Portland Archdiocese) to send out an urgent message on October 13th that their cause was under “financial assault.” In the mass e-mail, which can be reviewed in full here, Mutty says they had known from the opposition’s superior ground game that our side had been raising more money. But they had “never dreamed the situation was as dire as it is,” and are now urging their supporters to make a “sacrificial contribution” to pass Question 1.

Paul Hogarth is the Managing Editor of Beyond Chron, San Francisco’s Alternative Online Daily, where this piece was first published.

To find out more about Beyond Chron, click here.