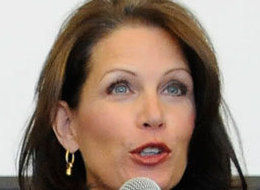 Rep. Michele Bachmann (R-MN) really didn’t want to answer a reporters question this weekend at the conservative How to Take Back America Conference in St. Louis. When asked about the brutal death of cancer survivor. part-time teacher and Census worker Bill Sparkman, Bachman refused to comment.

Sparkman was found on 9/12 in rural Kentucky tied to a tree. His ducktaped body was nude, except for his socks, and the words ‘FED’ were written across his chest with a felt tip marker. His Census badge was taped to the neck and upper chest area of his body. The FBI has been investigating whether the killing was related to his job as a Census worker. Killing a federal worker on the job or because of the job is a felony.

In the past, Bachmann claimed that filling out the Census would be the first steps to being put in an internment camp by the Obama administration. She even went as far as saying that she would not fill out her own census form. She has seemed to back off of that one, since that is obviously illegal.

According to David Weigel. reporter for the conservative newspaper, The Washington Independent :

After the speech, Bachmann had only a few minutes to sign autographs and collect a stack of CDs and books from fans who’d followed her into the lobby. I caught up to her as she headed outside and asked if she had any response to the murder of a Kentucky census worker, having noticed that the Census, a constant target for Bachmann, did not figure into her speech. Bachmann recoiled a little at the question and turned to enter her limo.

“Thank you so much!” she said.

You can find our previous diary about Sparkman’s death here

***Special Note: To anyone who would like to make a wild-eyed comment stating that I am blaming this poor man’s death on Michele Bachmann. Please just stop and read what is written. I am only reporting what she has said in the past about the Census, and that she was asked the question by a conservative reporter, and that she refused to answer. That’s it, period. Full stop.

As I have stated many times, until the FBI and local authorities make a final decision about the cause and motive of his death, its all speculation.

Derrick Thomas showed the bruises and cuts inflicted this week in Brooklyn Park in a beating that authorities are treating as a hate crime. A neighbor called 911, and police arrested two suspects as they committed a second assault nearby.

Minnesota Star Tribune/ Paul Walsh & Abby Simons—Derrick Thomas was on his bike with home in his sights, returning about 1 a.m. Wednesday from hanging out with his girlfriend and cousin in Brooklyn Park.

Before he knew to be terrified, Thomas, who has autism, found himself flying over his handlebars and writhing on his back on the concrete. Standing over him, he said, were three men armed with an ax, brass knuckles and a gun.

They beat and kicked the 18-year-old while screaming a racial epithet, and they ordered him to strip naked, he told police. Then they robbed him of everything he had, including his Air Jordans, blue jeans and shirt. Police said Thomas has a mental capacity of someone 8 to 10 years old.

“They were saying stuff like, ‘We hate the president; we’re gonna kill the president, his wife and his kids,'” Thomas recalled from his front stoop Friday, his left eye puffy and discolored. “They said every black person that comes through our park, we’re gonna kick their butt. We don’t like black people, period.”

The assault, and another on a second black man — Thomas’ uncle — just blocks away, led authorities Friday to file assault and robbery charges against Anthony P. Kilpela and Bryan C. Westerlund, both 21 and both white, of Minneapolis.
“We’re incensed,” said an angry Hennepin County Attorney Mike Freeman, who took the unusual step of calling a news conference about the charges from his living room while he was home ill.

“We will send the message that these kinds of hate crimes are not to be tolerated,” Freeman continued. “You do the racial thing, you’re gonna do more time, and we’ve asked for more time.”

The alleged comments about the Obamas drew the attention of the Secret Service, whose agents interviewed Thomas on Friday, according to his family.

“We will appropriately investigate, as we do all threats against the president,” said John Kirkwood, special agent in charge of the Secret Service’s Minneapolis field office. Such threats, Kirkwood said, are felonies.

OKLAHOMA CITY – Long-secret security tapes showing the chaos immediately after the 1995 bombing of the Oklahoma City federal building are blank in the minutes before the blast and appear to have been edited, an attorney who obtained the recordings said Sunday.
“The real story is what’s missing,” said Jesse Trentadue, a Salt Lake City attorney who obtained the recordings through the federal Freedom of Information Act as part of an unofficial inquiry he is conducting into the April 19, 1995, bombing that killed 168 people and injured hundreds more. The tapes turned over by the FBI came from security cameras various companies had mounted outside office buildings near the Alfred P. Murrah Federal Building. They are blank at points before 9:02 a.m., when a truck bomb carrying a 4,000 pound fertilizer-and-fuel-oil bomb detonated in front of the building, Trentadue said.
“Four cameras in four different locations going blank at basically the same time on the morning of April 19, 1995. There ain’t no such thing as a coincidence,” Trentadue said.

Pitt was presented with a plaque from the U.S. Green Building Council which said the actor and his foundation “Make It Right” had created the “largest and greenest single-family community in the world.”

“‘Make It Right’ has exceeded my expectations,” said Pitt who set up the foundation in 2007.

“Our criteria from the beginning were at odds, to say the least. We demanded that these homes be sustainable, that they have aesthetic qualities … that they be storm resilient and take safety in mind of the families who live there and that they would be affordable.”

“Make It Right” has created 13 homes in the New Orleans area the 9th Ward, which was devastated by Hurricane Katrina in 2005.

Each house is unique and has eco-friendly features like green roofs, which can cut heating and cooling costs dramatically.

“Now, they will make acquisitions … but they’re probably going to buy just stuff in their wheel house of those businesses. They’re not going to, I don’t think, go very far afield from their core competency.”

Crawford made the comments during a September 24 discussion at University of Southern California’s Annenberg School for Communication entitled “The Art of the Long View: The Media Company of 2020.”

Time Inc’s magazines include popular titles such as People and Sports Illustrated. In the second quarter, revenue at Time Inc publishing, the largest U.S. magazine publisher, fell 22 percent to $915 million due to a 26 percent decline in advertising revenue.